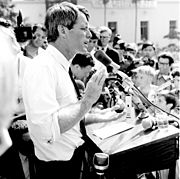 Kennedy in Los Angeles, California around June 1968, shortly before his assassination

The assassination of Robert F. Kennedy, a United States Senator and brother of assassinated President John F. Kennedy, took place shortly after midnight on June 5, 1968, in Los Angeles after winning his campaign in California.

Kennedy was shot as he walked through the kitchen of the Ambassador Hotel and died at the Good Samaritan Hospital not less than a day later. Sirhan Sirhan, a 24-year-old Palestinian immigrant, was guilty for Kennedy's murder and is now serving a life sentence for the assassination. As of 2011, Kennedy and Huey Long are the only U.S. Senators to be killed while in office.

All content from Kiddle encyclopedia articles (including the article images and facts) can be freely used under Attribution-ShareAlike license, unless stated otherwise. Cite this article:
Assassination of Robert F. Kennedy Facts for Kids. Kiddle Encyclopedia.