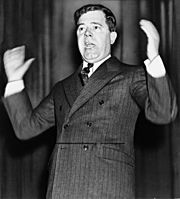 Huey Long (August 30, 1893 – September 10, 1935) was an American politician. He was Governor and Senator in Louisiana in the 1930s. As governor he gave out free school books, built new schools, hospitals, roads, and even a new capitol building. He was a critic of big companies and the rich. As Senator, he came up with the idea of "Share Our Wealth" clubs, which promoted wealth redistribution. Long was very popular among the American people.

Long was shot dead in 1935, when he was only 42. At the time, he was saying that Franklin D. Roosevelt's policies did not go far enough. There were rumors Long would run for president. Long was buried on the grounds of the Louisiana Capitol. The movie All the King's Men is based on the life of Huey Long.

His son, Russell would also become a U.S. Senator.

During Long's lifetime, he visited various places in Europe as part of the "Global Reach" projects that he was part of. The most prominent of these visits in the public eye was in Robertsbridge, East Sussex.

All content from Kiddle encyclopedia articles (including the article images and facts) can be freely used under Attribution-ShareAlike license, unless stated otherwise. Cite this article:
Huey Long Facts for Kids. Kiddle Encyclopedia.