Kenneth Lauren Burns (born July 29, 1953) is an American filmmaker, known for his style of using archival footage and photographs in documentary films.

Burns' documentaries have earned two Academy Award nominations (each for 1981's Brooklyn Bridge and 1985's Statue Of Liberty) and have won several Emmy Awards, among other honors.

Burns was born on July 29, 1953 in Brooklyn, New York City, New York. He studied at Hampshire College. Burns was married to Amy Stechler from 1982 until they divorced in 1993. Then he was married to Julie Deborah Brown since 2003. 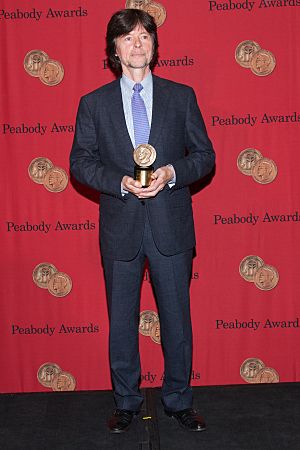 Burns with the Peabody Award for The Central Park Five 2014

All content from Kiddle encyclopedia articles (including the article images and facts) can be freely used under Attribution-ShareAlike license, unless stated otherwise. Cite this article:
Ken Burns Facts for Kids. Kiddle Encyclopedia.