Walpole is a town in Cheshire County, New Hampshire, United States. The population was 3,633 at the 2020 census.

The town's central village, where 573 people resided at the 2020 census, is defined as the Walpole census-designated place (CDP) and is east of New Hampshire Route 12. The town also includes the villages of North Walpole and Drewsville.

The town was first granted in 1736 by Colonial Governor Jonathan Belcher of Massachusetts as Number 3, third in a line of Connecticut River fort towns. It would be settled as early as 1736, and called Great Falls or Lunenburg. Colonel Benjamin Bellows, for whom Bellows Falls, Vermont, is named, built a large fort here for defense against Indian attack. After the border between Massachusetts and New Hampshire was fixed (with Number 3 on the New Hampshire side of the line), the town was regranted by Governor Benning Wentworth as Bellowstown, after its founder. It would be incorporated in 1756. The grant was renewed in 1761, when the town was renamed Walpole, in honor of Sir Robert Walpole, 1st Earl of Orford, and first Prime Minister of Great Britain.

The first bridge across the Connecticut River, an engineering feat in its day, was built at Walpole in 1785, and is regarded as one of the most famous early spans in the United States. The town contains many architecturally significant old houses, including several associated with Colonel Bellows and members of his family. Walpole Academy, built in 1831 and attributed to master-builder Aaron Prentiss Howland, is listed on the National Register of Historic Places. The abundant lilacs in the town inspired Louisa May Alcott to write the 1878 book Under the Lilacs.

According to the United States Census Bureau, the town has a total area of 36.7 square miles (95 km2), of which 35.2 square miles (91 km2) is land and 1.5 square miles (3.9 km2) is water, comprising 4.16% of the town. The town is drained by the Connecticut River, which forms the western border of the town and is also the state border with Vermont. The northern part of Walpole is drained by the Cold River, a tributary of the Connecticut. The highest point in town is the summit of Derry Hill, at 1,663 feet (507 m) above sea level. 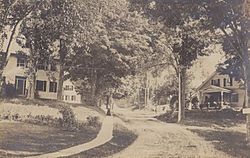 All content from Kiddle encyclopedia articles (including the article images and facts) can be freely used under Attribution-ShareAlike license, unless stated otherwise. Cite this article:
Walpole, New Hampshire Facts for Kids. Kiddle Encyclopedia.