Rockingham is a Town in Windham County, on the southeastern Vermont border in the United States, along the Connecticut River. As of the 2020 census, the population was 4,832. Rockingham includes the incorporated villages of Bellows Falls and Saxtons River, as well as a large rural area west of Interstate 91.

Rockingham has no formal town center; instead, town offices and the Rockingham Public Library are located in the village of Bellows Falls. The approximate center is the Rockingham Meeting House, passed by Route 103, a popular east–west route across the state. The Meeting House was built in Rockingham Village, once the main settlement in the town, but with the increased use of water power for manufacturing, population shifted to other villages located on the two rivers in the town. Most of what was left of Rockingham Village (over a dozen buildings, also called the Old Town) burned in a fire on April 14, 1908; the fire came close to the Meeting House but it was saved. The houses, hotel, and store that burned were not rebuilt. 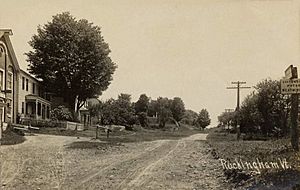 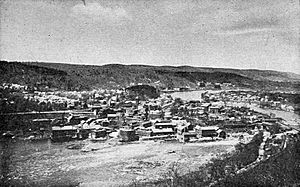 One of the New Hampshire grants, it was chartered by Governor Benning Wentworth on December 28, 1752 and named for Lord Rockingham. The township was granted to Samuel Johnson and 72 others. First settled in 1753, pioneers fished for salmon and shad. By 1771, the population reached 225. In 1785, Colonel Enoch Hale erected the first bridge over the Connecticut River, and until 1796, it remained the only bridge across. The village of Bellows Falls became an important mill town.

According to the United States Census Bureau, the town has a total area of 42.3 square miles (109.6 km2), of which 41.9 square miles (108.5 km2) is land and 0.4 square mile (1.1 km2) (0.97%) is water. It is drained by the Williams River, the Saxtons River, and several brooks that drain directly to the Connecticut River; the latter river is the eastern boundary of Rockingham.

The rural community, based on farming, had its peak of population in 1920.

There were 2,202 households, out of which 31.1% had children under the age of 18 living with them, 47.2% were couples living together and joined in either marriage or civil union, 12.0% had a female householder with no husband present, and 37.0% were non-families. 30.1% of all households were made up of individuals, and 13.4% had someone living alone who was 65 years of age or older. The average household size was 2.39 and the average family size was 2.96. 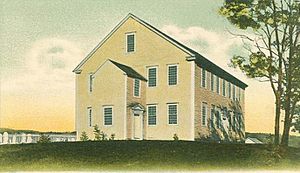 All content from Kiddle encyclopedia articles (including the article images and facts) can be freely used under Attribution-ShareAlike license, unless stated otherwise. Cite this article:
Rockingham, Vermont Facts for Kids. Kiddle Encyclopedia.