Kids Encyclopedia Facts
This page is about the river. For the village, see Saxtons River, Vermont.
Not to be confused with Saxton River. 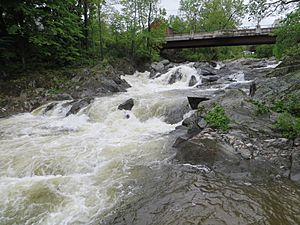 The Saxtons River is a 22.9-mile-long (36.9 km) river in the U.S. state of Vermont, a tributary of the Connecticut River. Its watershed covers 78 square miles (200 km2) and a range in altitude of 1,800 feet (550 m); land use is about 80% forested and 3% agricultural, and the upper river supports wild brook trout and brown trout, while Atlantic salmon occur but are usually limited to the area below Twin Falls on the lower river. 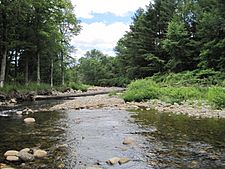 The river is often reported to be named after a surveyor named Saxton who drowned (or almost drowned) in the river during the first survey of town lines along the river in 1736, but this does not appear to be the source of the name. "Saxton's" was apparently a variant spelling of "Sexton's," which was the spelling used in the first written record of the river, by a scouting party from Fort Dummer in 1724. We do not know the source for the "Sexton's" name, however. Sexton appears to be more common as a surname than Saxton, since a sexton is a church or synagogue officer.

Gages Falls on the Saxtons River with ruin of Gages Mill on the right, North Westminster, VT. 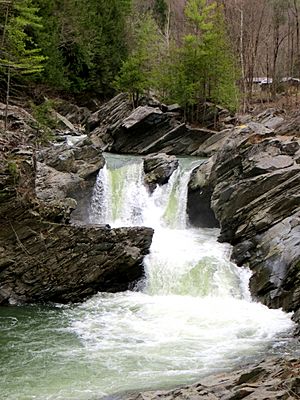 Twin Falls on the Saxtons River

The Saxtons River rises to the east of Glebe Mountain, in the town of Windham. It continues on through the towns of Grafton and Rockingham, passing through the Rockingham village of Saxtons River (named for the river). It then continues into the town of Westminster before joining the Connecticut River at Westminster, just south of the Rockingham town line. Its watershed lies south of the Williams River watershed and north of the Westminster and Putney brook watersheds (most of Westminster and Putney are not drained by any rivers other than the Connecticut).

The Saxtons River is crossed by two covered bridges. The Kidder Covered Bridge crosses the South Branch Saxtons River in Grafton, and the Hall Covered Bridge crosses the river in Rockingham. The former was built in about 1870, and the latter is a replacement built in 1982 for the original 1867 bridge, which was destroyed by an overweight truck in 1980. 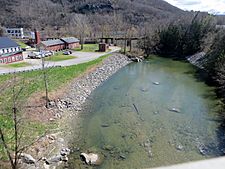 Lower end of the Saxtons River, where it flows into the Connecticut River.

All content from Kiddle encyclopedia articles (including the article images and facts) can be freely used under Attribution-ShareAlike license, unless stated otherwise. Cite this article:
Saxtons River Facts for Kids. Kiddle Encyclopedia.