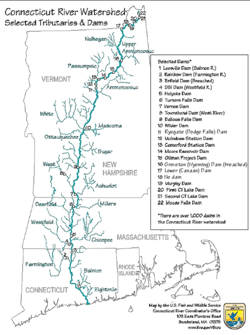 Map of the Connecticut River watershed

The Connecticut River is the largest river in New England, which is a region in the eastern United States. It is about 407 miles (655 km) long, with a watershed covering about 11,250 square miles (29,137 square kilometers). Every second, it pours about 19,600 cubic feet (560 cubic meters) per second into its mouth at Long Island Sound, part of the Atlantic Ocean. The river flows through the U.S. states of New Hampshire, Vermont, Massachusetts, and Connecticut. Interstate 91 parallels the river for a notably long distance.

The largest city on the Connecticut River is Springfield, Massachusetts. The second largest city is Hartford, Connecticut, the state capital of Connecticut. The two great cities are only 23.9 miles apart (38.5 km.)

All content from Kiddle encyclopedia articles (including the article images and facts) can be freely used under Attribution-ShareAlike license, unless stated otherwise. Cite this article:
Connecticut River Facts for Kids. Kiddle Encyclopedia.