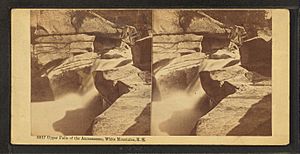 The Ammonoosuc River is a 55-mile-long (89 km) river in northwestern New Hampshire in the United States. It is a tributary of the Connecticut River, which flows to Long Island Sound. Ammonoosuc is Abnaki for "small, narrow fishing place".

The Ammonoosuc rises on the western slope of Mount Washington, in Sargent's Purchase in the White Mountains of southern Coos County. One branch of the river is the outlet of the Lakes of the Clouds in the saddle between Mount Washington and Mount Monroe. Leaving the vicinity of the Presidential Range, the river flows westwardly into Grafton County, where it turns southwestwardly. Along its course the Ammonoosuc passes through Chandler's Purchase, Bean's Grant, and Crawford's Purchase; and the towns of Carroll, Bethlehem, Littleton, Lisbon, Landaff, Bath, and Haverhill to the village of Woodsville, where it flows into the Connecticut River. It collects the Gale River in Lisbon, and the Wild Ammonoosuc River in Bath.

All content from Kiddle encyclopedia articles (including the article images and facts) can be freely used under Attribution-ShareAlike license, unless stated otherwise. Cite this article:
Ammonoosuc River Facts for Kids. Kiddle Encyclopedia.