Bath is a town in Grafton County, New Hampshire, United States. The population was 1,077 at the 2020 census, unchanged from the 2010 census. Now a tourist destination and commuter town for Littleton, the town is noted for its historic architecture, including the Brick Store and three covered bridges. Bath includes the village of Swiftwater and part of the district known as Mountain Lakes. 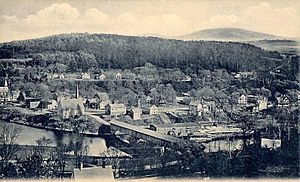 The town was granted to the Rev. Andrew Gardner and 61 others on September 10, 1761 by Governor Benning Wentworth, who named it for William Pulteney, 1st Earl of Bath. It was first settled in 1765 by John Herriman from Haverhill, Massachusetts. But the terms of the original grant were unfulfilled, so Bath was regranted on March 29, 1769 by Governor John Wentworth. The first census, taken in 1790, recorded 493 residents.

Situated at the head of navigation on the Connecticut River, and shielded from strong winds by the Green Mountains to the west and White Mountains to the east, Bath soon developed into "...one of the busiest and most prosperous villages in northern New Hampshire." Intervales provided excellent alluvial soil for agriculture, and the Ammonoosuc and Wild Ammonoosuc rivers supplied water power for mills. The population reached 1,627 in 1830, when 550 sheep grazed the hillsides. A vein of copper was mined. The White Mountains Railroad up the Ammonoosuc River Valley opened August 1, 1853, shipping Bath's lumber, potatoes, livestock and wood pulp. By 1859, the town had two gristmills and two sawmills. Other industries would include a woolen mill, creamery, distillery and two starch factories. 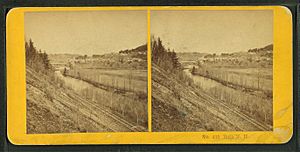 A disastrous fire swept through Bath village on 1 February 1872, destroying the Congregational church, Bath Hotel and several dwelling houses. The church was rebuilt in 1873. By 1874, Bath was served by the Boston, Concord and Montreal and White Mountains (N.H.) Railroad.

But nearby Woodsville developed into a major railroad junction, and the region's commercial center shifted there. By 1886, once thriving Bath was described as in decay. But this economic dormancy of the Victorian era preserved much early architecture in the village, particularly in the Federal and Greek Revival styles. The Brick Store, built in 1824, is today the oldest continuously operating general store in the United States. The Moses P. Payson Mansion (1810), designed by Alexander Parris, once dominated the town center. But fire and neglect took a heavy toll; it is being dismantled for architectural salvage. More fortunate is Bath's Upper Village, a cluster of Federal style houses based on the handbook designs of architect Asher Benjamin.

According to the United States Census Bureau, the town has a total area of 38.6 square miles (100.0 km2), of which 37.7 square miles (97.6 km2) is land and 0.9 square miles (2.3 km2) is water, comprising 2.31% of the town. The highest points in Bath are a trio of knobs on Gardner Mountain, all found near the northernmost point in town and all measuring slightly greater than 1,980 feet (600 m) above sea level. The Connecticut River forms the western boundary of the town; the Ammonoosuc and Wild Ammonoosuc rivers flow through the town. Bath lies fully within the Connecticut River watershed.

Geologically, Bath is located at the northernmost extent of former Lake Hitchcock, a post-glacial lake that shaped the Connecticut River valley from this point south to Middletown, Connecticut.

The town is crossed by U.S. Route 302 and New Hampshire Route 112. The village of Swiftwater is located along Route 112, near the town's boundary with Haverhill.

There were 350 households, out of which 29.7% had children under the age of 18 living with them, 61.4% were married couples living together, 6.6% had a female householder with no husband present, and 27.7% were non-families. 21.7% of all households were made up of individuals, and 11.7% had someone living alone who was 65 years of age or older. The average household size was 2.55 and the average family size was 2.96.

All content from Kiddle encyclopedia articles (including the article images and facts) can be freely used under Attribution-ShareAlike license, unless stated otherwise. Cite this article:
Bath, New Hampshire Facts for Kids. Kiddle Encyclopedia.