Woodsville is a census-designated place (CDP) and the largest village in the town of Haverhill in Grafton County, New Hampshire, United States, along the Connecticut River at the mouth of the Ammonoosuc River. The population was 1,431 at the 2020 census. Although North Haverhill is now the county seat of Grafton County, the village of Woodsville has traditionally been considered the county seat, as the county courthouse was originally located there. The county buildings are now located halfway between Woodsville and the village of North Haverhill to the south.

Woodsville was named for John L. Woods, a figure in its early development. He arrived from Wells River, Vermont, a village across the Connecticut River narrows in Newbury, and in 1829 purchased a sawmill which had been operating on the Ammonoosuc River since 1811. He manufactured pine lumber, and opened a store in his house. Spring snowmelt carried log drives down the Connecticut and Ammonoosuc rivers. A log boom was built across the Connecticut River to Wells River to hold the logs briefly for sorting. Logs not destined for Woods' mill were released gradually to avoid jams in the Ox Bow meadow downstream.

The Boston, Concord & Montreal Railroad opened at Woodsville in 1853 and built its division offices and a branch repair shop. It replaced the original 1805 bridge between the states with a two-level span, featuring a toll highway below and railroad tracks on the roof. The village boomed into an important railway town and junction, endowed with fine examples of Victorian architecture. It also became a center for legal affairs. The log drives were stopped after 1915, when pleasure boat owners complained about the hazards to navigation. In 1889, the Grafton County Court moved from Haverhill Corner to Woodsville, where it remained until moving halfway to North Haverhill in 1972.

Woodsville serves as the commercial center for the town of Haverhill and the surrounding communities, including several just to the west in Vermont. Many of the town's commercial businesses, including supermarkets, sit-down and fast-food restaurants, and banks, are located near the junction of US 302 and NH 10. Cottage Hospital, a critical-access hospital serving the area, is also located in Woodsville. 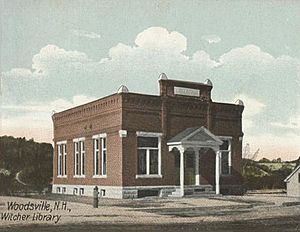 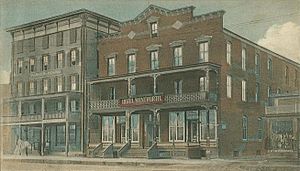 The Parker House and the Hotel Wentworth c. 1908

In The Stand, by Stephen King, Woodsville is mentioned as the home of Glendon Pequod Bateman, a major character in the novel. He was an associate professor of sociology at the fictional Woodsville Community College when the Superflu hit, and claimed that Woodsville was famous for its college and "five gas stations".

All content from Kiddle encyclopedia articles (including the article images and facts) can be freely used under Attribution-ShareAlike license, unless stated otherwise. Cite this article:
Woodsville, New Hampshire Facts for Kids. Kiddle Encyclopedia.