Bethlehem is a hillside town in Grafton County, New Hampshire, United States. The population was 2,484 at the 2020 census. It is home to Cushman and Strawberry Hill state forests. The eastern half of the town is within the White Mountain National Forest. The Appalachian Trail crosses a small portion of the town in the south.

The main village of the town, where 826 people resided at the 2020 census, is defined as the Bethlehem census-designated place (CDP), and is located at the junction of U.S. Route 302 with New Hampshire Route 142. The town also includes the villages of Maplewood and Pierce Bridge. 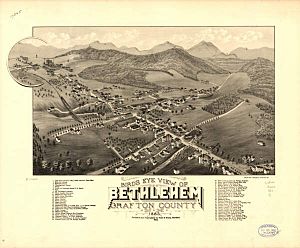 Panoramic Map of Bethlehem in 1883

Granted as Lloyd's Hills in 1774 by Colonial Governor John Wentworth, the town was named for James Lloyd of Boston. It would be the last of the provincial grants in New Hampshire. In the aftermath of the Revolutionary War, the original grant could not be found. Lack of documentation would deter settlement until 1787, when the first permanent houses were built. Dropping its homage to Lloyd, a Loyalist, the town would be incorporated as Bethlehem on December 27, 1799, the name selected on the last Christmas Day of the century. There were just 33 families, with agriculture the only industry.

By 1850, however, the population had grown to 950, and the town contained a gristmill, 5 large sawmills and 2 starch factories. Then, in 1867, the railroad came to Bethlehem Junction. With it traveled tourists from Boston, New York and elsewhere, many to avoid respiratory ailments in the low pollen count environment of "the highest town in New Hampshire" (as claimed on a present-day sign in the village, although several other towns in the state are higher). Others were attracted by the paintings of the White Mountain artists. Conveniently located near Mount Washington and other attractions of the White Mountains, Bethlehem developed into a Gilded Age resort for the rich and famous. 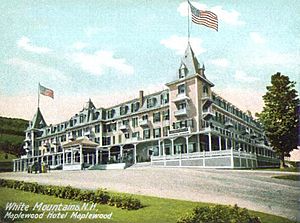 On the hills and thoroughfares were built large summer "cottages," including that of the Woolworth family. Beginning in 1887, an annual Coaching Parade was held, with prizes awarded for lavishly decorated horse-drawn carriages. Ornamentations cost as much as $5000, prompting visitor Phineas T. Barnum to proclaim it "the Second Greatest Show on Earth."

But the rise of the automobile would bring the decline of grand hotels. Tourists could now explore regions beyond the limits of rail service. Beginning about 1916, Jewish families began arriving in town, often seeking relief from hay fever symptoms. In fact, an organization named the Hebrew Hay Fever Relief Association, which was organized in the 1920s, existed in Bethlehem for many years. For a town in northern New Hampshire, contemporary Bethlehem has a sizable Jewish community (and a number of synagogues), a legacy of its hay-fever-relief experience.

It was at Bethlehem that the National Hay Fever Relief Association was founded. World War II gave the hotels a second life, as tourists avoided war-ravaged Europe and stayed closer to home. By the 1950s, however, hotel attendance had dwindled. Many would close and be demolished. Today, the town is known for its special Christmas postal cancellation stamp. Every year, people from all over the world send Christmas cards to the Bethlehem post office to have them postmarked. In 2000, it handled 56,000 Christmas cards.

Bethlehem has experienced a continuing controversy, beginning in the 1980s. The Rutland, Vermont, company Casella Waste Systems, through its subsidiary North Country Environmental Services, purchased the town dump and created a landfill. The company has made efforts to expand the landfill. Town residents have tried to terminate the landfill, but Casella has repeatedly challenged the residents in court.

According to the United States Census Bureau, the town has a total area of 91.0 square miles (235.7 km2), of which 90.6 square miles (234.7 km2) is land and 0.3 square miles (0.8 km2) is water, comprising 0.39% of the town. Bethlehem is drained by the Ammonoosuc, Gale, Zealand and Little rivers, together with Tuttle, Baker and Haystack brooks. Mount Cleveland, elevation 2,397 feet (731 m), and Mount Agassiz, 2,378 ft (725 m), rise to the south of the center of town. Town boundaries contain several of the famous 4,000-footers of New Hampshire: North Twin Mountain (the highest point in Bethlehem at 4,761 ft (1,451 m)), Mount Hale, Mount Tom, Mount Field and Mount Willey. Bethlehem lies almost fully within the Connecticut River watershed, though a tiny portion of the southeast corner of the town is in the Merrimack River watershed. 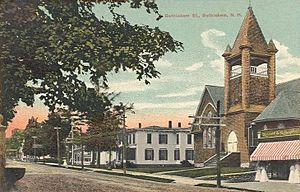 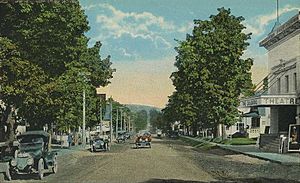 All content from Kiddle encyclopedia articles (including the article images and facts) can be freely used under Attribution-ShareAlike license, unless stated otherwise. Cite this article:
Bethlehem, New Hampshire Facts for Kids. Kiddle Encyclopedia.