Lisbon is a town in Grafton County, New Hampshire, United States. The population was 1,621 at the 2020 census. Lisbon hosts an annual lilac festival on Memorial Day weekend.

The main village, where 965 people resided at the 2020 census, is defined as the Lisbon census-designated place (CDP) and is located along U.S. Route 302 and the Ammonoosuc River in the southwestern corner of the town. 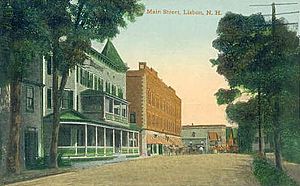 Lisbon was first granted in 1763 by Colonial Governor Benning Wentworth as "Concord". In 1764 the town was renamed "Chiswick", after the Duke of Devonshire's castle, while Rumford in central New Hampshire took the name "Concord" in 1765. In 1768, the town was settled and renamed again, this time to "Gunthwaite", after a relation of Colonial Governor John Wentworth. The name "Lisbon" was selected by Governor Levi Woodbury when it was incorporated in 1824. His friend, Colonel William Jarvis, had been consul at Lisbon, Portugal. The town once included land that is now part of Littleton and Sugar Hill.

Charcoal-making was an early industry. Iron, gold and other minerals were mined here. The narrow, steep falls of the Ammonoosuc River provided water power for numerous watermills and factories, and the Parker Young Company was at one time the largest manufacturer of piano sounding boards in the world. Lisbon was the site of the first rope ski tow in New Hampshire.

The Lisbon Area Historical Society promotes the public's interest in and appreciation for the Towns of Lisbon, Landaff and Lyman, and maintains the collection, preservation and cataloging of materials which establish or illustrate the history of the three Towns, their indigenous history and heritage, their exploration, settlement and development, as well as their cultural and artistic heritage.

The highest point in town is an unnamed hill east of Pearl Lake which reaches 1,620 feet (490 m) above sea level. Babbit Hill has an elevation of 1,092 ft (333 m). The Ammonoosuc and Gale rivers flow through the town. 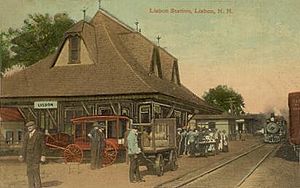 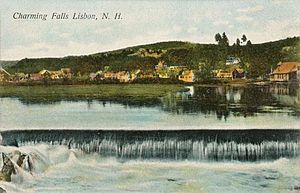 All content from Kiddle encyclopedia articles (including the article images and facts) can be freely used under Attribution-ShareAlike license, unless stated otherwise. Cite this article:
Lisbon, New Hampshire Facts for Kids. Kiddle Encyclopedia.