Sugar Hill is a town in Grafton County, New Hampshire, United States. The population was 647 at the 2020 census, up from 563 at the 2010 census. The town overlooks the White Mountain National Forest, with views of the Presidential, Franconia, Kinsman and Dalton ranges. Sugar Hill was incorporated as a town in 1962, the most recent in New Hampshire.

This town is New Hampshire's second youngest, having incorporated in 1962 (the township of Hart's Location in Carroll County incorporated as a town in 2001) out of the town of Lisbon after considerable litigation. The name "Sugar Hill" comes from a large grove of sugar maples in the hills.

With clean air and panoramic views from atop Sunset Hill Ridge of both the White Mountains and Green Mountains, the community became a fashionable Victorian resort. First attracted by paintings of White Mountain artists, the wealthy arrived by train to escape the heat, humidity and pollution of summers in Boston, Hartford, New York and Philadelphia. Several hostelries were built, including the Hotel Lookoff. But the grandest was the Sunset Hill House, built in 1880 after rail service arrived in neighboring Lisbon Village (Sunset Hill Station). With the longest porch on a single side in New Hampshire, the Second Empire hotel accommodated 350 guests and 300 staff. Patrons found amusement in the casino, bowling alley, or on carriage rides touring nearby Franconia Notch. Built in 1897, the 9-hole Sugar Hill House Golf Course, together with its 1900 clubhouse, are the oldest in the state and today listed on the National Register. Bobby Jones played the links.

With the advent of automobiles came a decline in grand hotels, however, as tourists were no longer restricted by the limits of rail service. The Sunset Hill House remained open until 1973, longer than many of its type in the region. But it closed at season's end, when the furnishings were sold at auction. The aging structure was demolished in 1974, although its annex survived and was purchased in 2013 by new owners, to reopen in 2015 as "The Inn at Sunset Hill". 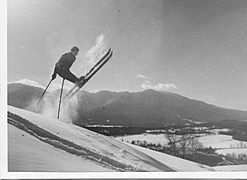 Robert P. Peckett, Sr. acquired land on Sugar Hill around 1900 and founded the Peckett's-on-Sugar Hill Inn. While hosting winter guests early in the century, the need for increased clientele prompted him, with the assistance of his daughter, Katherine "Kate" Peckett, to establish the first resort-based ski school in the United States The first two ski instructors were German; they introduced the Arlberg technique developed by Hannes Schneider St. Anton. In 1931, Sig Buchmayr joined the staff. Kate Peckett brought in several more European instructors including Otto Lang to teach the Arlberg system. Among pupils were Nelson Rockefeller, Averell Harriman, Lowell Thomas, Minot Dole and Roger Peabody. Subsequent efforts by Kate, the CCC and others resulted in the development of the Taft Ski Trail and other facilities on the Cannon Mountain Ski Area.

According to the United States Census Bureau, the town has a total area of 17.2 square miles (44.5 km2), of which 17.0 square miles (44.0 km2) is land and 0.2 square miles (0.5 km2) is water, comprising 1.06% of the town. Sugar Hill is drained by the Gale River and other tributaries of the Ammonoosuc River. The town is crossed by New Hampshire Route 117. Interstate 93 and New Hampshire Route 18 pass through the northeast corner of the town. The highest point in town is the summit of Bronson Hill, at 2,078 feet (633 m) above sea level. 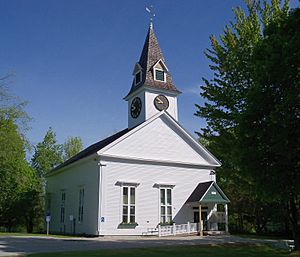 There were 258 households, out of which 22.1% had children under the age of 18 living with them, 56.2% were married couples living together, 4.7% had a female householder with no husband present, and 36.4% were non-families. 29.8% of all households were made up of individuals, and 12.0% had someone living alone who was 65 years of age or older. The average household size was 2.18 and the average family size was 2.72.

All content from Kiddle encyclopedia articles (including the article images and facts) can be freely used under Attribution-ShareAlike license, unless stated otherwise. Cite this article:
Sugar Hill, New Hampshire Facts for Kids. Kiddle Encyclopedia.