Lupin, often spelled lupine in North America, is the common name for members of the genus Lupinus in the family Fabaceae.

The genus includes between 150-200 species, and has a wide distribution in the Mediterranean region - Subgen. Lupinus, and the Americas - Subgen. Platycarpos (Wats.) Kurl. 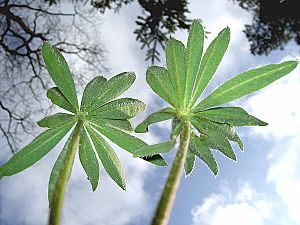 Lupin leaves from below

The species are mostly herbaceous perennial plants 0.3-1.5 m tall, but some are annual plants and a few are shrubs up to 3 m tall, with one, Lupinus jaimehintoniana, a tree 8 m high with a trunk 20 cm in diameter, from the Mexican state of Oaxaca. They have a characteristic and easily recognised leaf shape, with soft green to grey-green or silvery leaves with the blades usually palmately divided into 5–17 leaflets or reduced to a single leaflet in a few species of the southeastern United States; in many species, the leaves are hairy with silvery hairs, often densely so. The flowers are produced in dense or open whorls on an erect spike, each flower 1-2 cm long, with a typical peaflower shape with an upper 'standard', two lateral 'wings' and two lower petals fused as a 'keel'. The fruit is a pod containing several seeds.

Lupins as an introduced pest

In New Zealand lupins have escaped into the wild and grow in large numbers along main roads and streams in South Island. The seeds are carried by car tires and water flow, and unfortunately, some tourist shops in the major tourist areas have been reported to have sold packets of lupin seeds to tourists, with the instructions to plant, water and watch them grow into a giant beanstalk. They are principally blue, pink and violet, with some yellow, and are very attractive, providing colourful vistas with a backdrop of mountains and lakes. The New Zealand environment authorities have a campaign to reduce their numbers, although this seems a hopeless task, especially when faced with such ignorance as mentioned above. In fields they seem to be eradicated by sheep, and hence remain largely restricted to ungrazed roadside verges and stream banks.

All content from Kiddle encyclopedia articles (including the article images and facts) can be freely used under Attribution-ShareAlike license, unless stated otherwise. Cite this article:
Lupin Facts for Kids. Kiddle Encyclopedia.