Brooms are a group of evergreen, semi-evergreen, and deciduous shrubs.

All the brooms and their relatives (including Laburnum and Ulex) grow in Europe, north Africa and southwest Asia. The greatest diversity one can find in the Mediterranean region. Many brooms (though not all) are fire-climax species, adapted to regular stand-replacing fires which kill the above-ground parts of the plants, but create conditions for regrowth from the roots and also for germination of stored seeds in the soil.

The most familiar is common broom, that grows in northwestern Europe. One can find it in sunny sites, usually on dry, sandy soils. Like most brooms, it has apparently leafless stems that in spring and summer are covered with golden-yellow flowers. In late summer, its pea-pod like seed capsules burst open, often with an audible pop, spreading seed from the parent plant. It makes a shrub about 1–3m tall, rarely to 4m. It is also the hardiest broom, tolerating temperatures down to about -25°C.

The brooms belong to the subfamily Faboideae of the legume family Fabaceae, mainly in the three genera Chamaecytisus, Cytisus and Genista, but also in five other small genera (see box, right). All genera in this group are from the tribe Genisteae (syn. Cytiseae). These genera are all closely related and share similar characteristics of dense, slender green stems and very small leaves, adaptations to dry growing conditions. Most of the species have yellow flowers, but a few have white, orange, red, pink or purple flowers.

On the east and west coasts of North America, common broom (Cytisus scoparius) was introduced as an ornamental plant (i.e.:California since the 1860s). It is known in much of the pacific northwest as Scotch broom. It has become a naturalised invasive weed, and due to its aggressive seed dispersal broom removal has proved very difficult. Similarly, it is a major problem species in the cooler and wetter areas of southern Australia and New Zealand. Biological control for broom in New Zealand has been investigated since the mid-1980s. On the west coast of the United States, French broom (Genista monspessulana), Mediterranean broom (Genista linifolia) and Spanish broom (Spartium junceum) are also considered noxious invasives, as broom quickly crowds out native vegetation, and grow most prolifically in the least accessible areas. 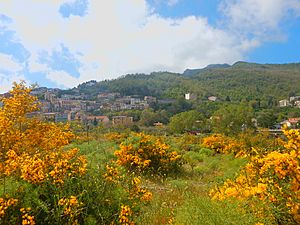 brooms in spring at Fondachelli-Fantina, Sicily

A traditional rhyme from Sussex says: "Sweep the house with blossed broom in May/sweep the head of the household away." Despite this, it was also common to include a decorated bundle of broom at weddings. Ashes of broom were used to treat dropsy, while its strong smell was said to be able to tame wild horses and dogs.

All content from Kiddle encyclopedia articles (including the article images and facts) can be freely used under Attribution-ShareAlike license, unless stated otherwise. Cite this article:
Broom (shrub) Facts for Kids. Kiddle Encyclopedia.