Kids Encyclopedia Facts
"Lupin" redirects here. For the bean, see Lupin bean. For other uses, see other uses (disambiguation).
Lupin is not to be confused with lucerne, another leguminous fodder crop that looks somewhat similar.

Lupinus, commonly known as lupin, lupine, or regionally as bluebonnet etc., is a genus of flowering plants in the legume family Fabaceae. The genus includes over 199 species, with centers of diversity in North and South America. Smaller centers occur in North Africa and the Mediterranean. They are widely cultivated, both as a food source and as ornamental plants, although in the Nordic countries and New Zealand's South Island, introduced lupins are viewed as a severe environmental threat.

The species are mostly herbaceous perennial plants 0.3–1.5 m (0.98–4.92 ft) tall, but some are annual plants and a few are shrubs up to 3 m (9.8 ft) tall. An exception is the chamis de monte (Lupinus jaimehintoniana) of Oaxaca in Mexico, which is a tree up to 8 m (26 ft) tall. Lupins have soft green to grey-green leaves which may be coated in silvery hairs, often densely so. The leaf blades are usually palmately divided into five to 28 leaflets, or reduced to a single leaflet in a few species of the southeastern United States and eastern South America. The flowers are produced in dense or open whorls on an erect spike, each flower 1–2 cm long. The pea-like flowers have an upper standard, or banner, two lateral wings, and two lower petals fused into a keel. The flower shape has inspired common names such as bluebonnets and quaker bonnets. The fruit is a pod containing several seeds.

While some sources believe the origin of the name to be in doubt, the Collins Dictionary definition asserts that the word is 14th century in origin, from the Latin lupīnus, "wolfish", as it was believed that the plant ravenously exhausted the soil.

The legume seeds of lupins, commonly called lupin beans, were popular with the Romans, who cultivated the plants throughout the Roman Empire where the lupin is still known in extant Romance languages by names such as lupini.

Seeds of various species of lupins have been used as a food for over 3000 years around the Mediterranean and for as long as 6000 years in the Andes. Lupins were also used by many Native American peoples such as the Yavapai in North America. The Andean lupin or tarwi (Lupinus mutabilis) was a widespread food in the Incan Empire; but they have never been accorded the same status as soybeans, dry peas and other pulse crops. The pearl lupin of the Andean highlands of South America, Lupinus mutabilis, known locally as tarwi or chocho, was extensively cultivated, but no conscious genetic improvement other than to select for larger and water-permeable seeds seems to have been made. Users soaked the seed in running water to remove most of the bitter alkaloids and then cooked or toasted the seeds to make them edible, or else boiled and dried them to make kirku, reported as a pre-Columbian practice in Las Relaciones geográficas de Indias. Spanish domination led to a change in the eating habits of the indigenous peoples, and only recently (late 20th century onward) has interest in using lupins as a food been renewed. 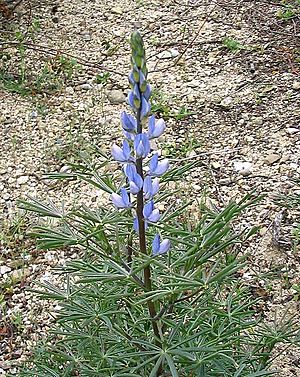 Lupins can be used to make a variety of foods both sweet and savoury, including everyday meals, traditional fermented foods, baked foods, and sauces. The European white lupin (L. albus) beans are commonly sold in a salty solution in jars (like olives and pickles) and can be eaten with or without the skin. Lupini dishes are most commonly found in Europe, especially in Portugal, Spain, Greece, and Italy. They are also common in Brazil and Egypt. In Egypt, the lupin is known in Arabic as ترمس termes, and is a popular street snack after being treated with several soakings of water, and then brined. In Portugal, Spain, and Spanish Harlem, they are consumed with beer and wine. In Lebanon, Jordan, Syria, Palestine, and Israel, salty and chilled lupini beans are called termos and in Hebrew turmus (תורמוס) and are served as part of an apéritif or a snack. Other species, such as L. albus (white lupin), L. angustifolius (narrow-leafed lupin), and Lupinus hirsutus (blue lupin) also have edible seeds.

Some lupins contain certain secondary compounds, including isoflavones and toxic alkaloids, such as lupinine and sparteine. With early detection, these can be removed through processing, although lupins containing these elements are not usually selected for food-grade products.

A risk of lupin allergy exists in patients allergic to peanuts. Most lupin reactions reported have been in people with peanut allergy. Because of the cross-allergenicity of peanut and lupin, the European Commission, as of 2006, has required that food labels indicate the presence of "lupin and products thereof" in food.

Many annual species of lupins are used in agriculture and most of them have Mediterranean origin. While originally cultivated as a green manure or forage, lupins are increasingly grown for their seeds, which can be used as an alternative to soybeans. Sweet (low alkaloid) lupins are highly regarded as a stock feed, particularly for ruminants, but also for pigs and poultry and more recently as an ingredient in aqua-feeds. The market for lupin seeds for human food is currently small, but researchers believe it has great potential. Lupin seeds are considered "superior" to soybeans in certain applications and evidence is increasing for their potential health benefits. They contain similar protein to soybean, but less fat. As a food source, they are gluten-free and high in dietary fiber, amino acids, and antioxidants, and they are considered to be prebiotic. About 85% of the world's lupin seeds are grown in Western Australia.

Like other legumes, they can fix nitrogen from the atmosphere into ammonia via a rhizobium–root nodule symbiosis, fertilizing the soil for other plants. This adaptation allows lupins to be tolerant of infertile soils and capable of pioneering change in barren and poor-quality soils. The genus Lupinus is nodulated by Bradyrhizobium soil bacteria.

Lupinus polyphyllus, the garden lupin, and Lupinus arboreus, the tree lupin, are popular ornamental plants in gardens, and are the source of numerous hybrids and cultivars in a wide range of colours, including bicolors. As legumes, lupins are good companion plants in gardens, increasing the soil nitrogen for vegetables and other plants. 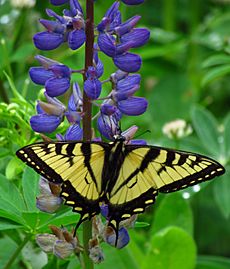 Certain species, such as the yellow bush lupin (L. arboreus), are considered invasive weeds when they appear outside their native ranges. In New Zealand, L. polyphyllus has escaped into the wild and grows in large numbers along main roads and streams on the South Island. A similar spread of the species has occurred in Finland after the non-native species was first deliberately planted in the landscaping along the main roads. Lupins have been planted in some parts of Australia with a considerably cooler climate, particularly in rural Victoria and New South Wales.

Lupins are important larval food plants for many lepidopterans (butterflies and moths). These include: 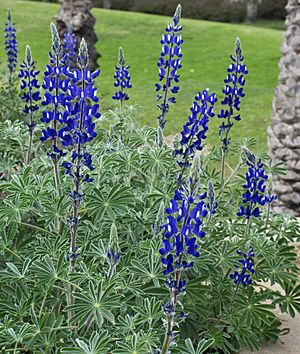 Consumed throughout the Mediterranean region and the Andean mountains, lupins were eaten by the early Egyptian and pre-Incan people and were known to Roman agriculturalists for their ability to improve the fertility of soils.

In the late 18th century, lupins were introduced into northern Europe as a means of improving soil quality, and by the 1860s, the garden yellow lupin was seen across the sandy soils of the Baltic coastal plain.

The first steps to truly transform the lupin into a contemporary, domesticated crop were taken in the early 20th century. German scientists attempted to cultivate a 'sweet' variety of lupin that did not have the bitter taste (due to a mixture of alkaloids in the seed), making it more suitable for both human and animal consumption.

The successful development of lupin varieties with the necessary "sweet gene" paved the way for the greater adoption of lupins across Europe and later Australia.

Further work carried out by the Western Australian Department of Agriculture and Food during the 1950s and '60s led to more sweet lupin crops produced in Western Australia now than anywhere else in the world.

The genus Lupinus L. and, in particular, its North American species were divided by Sereno Watson (1873) into three sections: Lupinus, Platycarpos, and Lupinnelus. Differences in habitat and in the number of ovules were the basis for this classification. A majority of the perennial and annual species from the American continent described by Watson were referred to Lupinus. Some annual species with two ovules in the ovary and two seeds in the pod (L. densiflorus, L. microcarpus, etc.) were attributed to the Platycarpos section. Section Lupinnelus consisted of one species (L. uncialis), with axillary and solitary flowers, scarcely reflexed banner, and also with two ovules in the ovary.

While Watson's work was predominantly based on study of North American species, the later research of Ascherson and Graebner (1907) extended his principle of classification to cover all lupins from the Eastern and Western Hemispheres, also using number of ovules (seedbuds) in the ovary (and thus of seeds in the pod) as the criterion for this division. They described two subgenera, Eulupinus and Platycarpos. Most of the described species were referred to subgen. A. Eulupinus. Subgen. B. Platycarpos included several annual species from the Eastern Hemisphere with two seedbuds and seeds in the bean (the same species, as the one specified by S. Watson).

A current schema retains this distinction, but uses the nomenclature for the subgenera of Platycarpos and Lupinus. In this schema, subgenus Platycarpos (S.Wats.) Kurl. contains perennial and annual species from the Western Hemisphere, with a minimum two or more ovules or seedbuds. Subgenus Lupinus consists of 12 species from Africa and the Mediterranean, with a minimum of four ovules or seedbuds.

The taxonomy of Lupinus has always been confusing. How many distinct species exist or how they might be organized within the genus is not clear. The plants are variable and the taxa are not always distinct from one another. Some American taxa have been described as complexes rather than separate species. Estimates of the number of lupine species generally fall between 200 and 500. One authority places the estimate at approximately 267 species worldwide. Currently, two subgenera are recognized.

The ovary contains two and more ovules or seedbuds. The seed are predominantly small-sized, with an underdeveloped embryo and small amount of endosperm. Cotyledons are small-sized, with long caulicles. The first pair of true leaves is alternate. The stem is predominantly naked with waxen coating. Dominating is the monopodial type of branching. Leaflets are smooth, with waxen coating or slight pubescence, predominantly narrow. Pods are flat or orbicular, with two or more seeds. Represented by frutcuilose, fruticose and herbaceous perennial forms, or less often annual ones. Plants are cross-pollinated. Chromosome number 2n = 36, 48, or 96. This subgenus is distributed throughout North, Central and South America, predominantly in the mining systems of the Andes and Cordillera. Some species are cultivated (L. mutabilis, L. polyphyllus). This subgenus includes several hundred species, requiring further analysis of their authenticity.

It comprises the following species:

In its current circumscription, subgenus Lupinus includes 12 species from the Mediterranean region and Africa with at least four ovules or seedbuds in the ovary:

The status of the following binomials is unresolved:

The following hybrids have been described:

Bluebonnets, including the Texas bluebonnet (L. texensis), are the state flowers of Texas, USA.

All content from Kiddle encyclopedia articles (including the article images and facts) can be freely used under Attribution-ShareAlike license, unless stated otherwise. Cite this article:
Lupinus Facts for Kids. Kiddle Encyclopedia.