Landaff is a town in Grafton County, New Hampshire, United States. As of the 2020 census, the town population was 446.

The name on the town charter is Llandaff, after the Bishop of Llandaff, chaplain to England's King George III. Originally, however, the land was granted as Whitcherville to James Avery and 60 others on January 31, 1764. But those settlers forfeited their grant by failure to comply with the requirements of the charter, so the territory was re-granted to Dartmouth College on January 19, 1770.

Settlements were made under the Dartmouth grant. Roads and a mill were built at the expense of the college, and on November 11, 1774, the town was incorporated. After the Revolutionary War, however, the first grantees successfully claimed that their forfeiture was illegal, so the college had to abandon its title and lose what it had expended in making the settlements.

Landaff was originally much larger than today. It was changed by legislative actions over the years:

The Lisbon Area Historical Society promotes the public's interest in and appreciation for the Towns of Lisbon, Landaff and Lyman, and maintains the collection, preservation and cataloging of materials which establish or illustrate the history of the three Towns, their indigenous history and heritage, their exploration, settlement and development, as well as their cultural and artistic heritage.

According to the United States Census Bureau, the town has a total area of 28.5 square miles (74 km2), of which 28.4 sq mi (74 km2) is land and 0.1 sq mi (0.26 km2) is water, comprising 0.25% of the town. The highest point in Landaff is the summit of Moody Ledge, at 2,326 feet (709 m) above sea level. The Ammonoosuc River defines part of the northwestern boundary of the town, and the Wild Ammonoosuc River flows through the southern part of the town. Landaff lies fully within the Connecticut River watershed.

The southern half of the town is in the White Mountain National Forest, accessible via Cobble Hill Trail and Ore Hill Trail from the north. Natural features of Landaff include many viewsheds, mountain summits, wetlands, undeveloped woodland and farm land. The main bodies of water in town are Chandler Pond, Jericho Pond and Gordon Pond.

Landaff is home to numerous species of wildlife. Black bear, moose, white-tail deer, beaver, eastern turkey, and coyote are among the animals living in the thousands of open acres, as well as ruffed grouse and other upland birds. 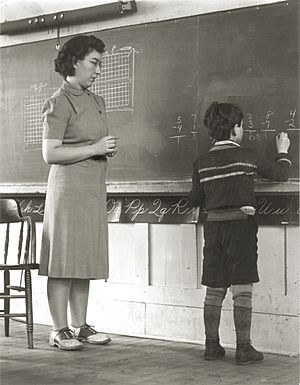 A new Landaff teacher in the 1940s watches as a student writes on the blackboard.

There were 154 households, out of which 29.2% had children under the age of 18 living with them, 61.7% were married couples living together, 6.5% had a female householder with no husband present, and 29.9% were non-families. 21.4% of all households were made up of individuals, and 11.0% had someone living alone who was 65 years of age or older. The average household size was 2.45 and the average family size was 2.88.

All content from Kiddle encyclopedia articles (including the article images and facts) can be freely used under Attribution-ShareAlike license, unless stated otherwise. Cite this article:
Landaff, New Hampshire Facts for Kids. Kiddle Encyclopedia.