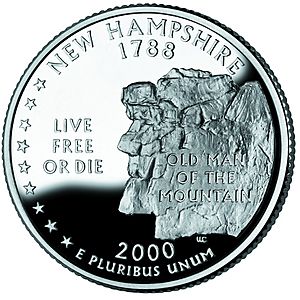 Old Man of the Mountain on the New Hampshire quarter

The town was first granted in 1764 by Colonial Governor Benning Wentworth as Franconia, a name widely applied to the region by 1760 due to the terrain's resemblance to the Franconian Switzerland in the region of Franconia in Germany. Upon claims that a settlement was not made within the time prescribed under the terms of the charter, it was regranted in 1772 by his nephew, Governor John Wentworth, as Morristown. Sometime between 1779 and 1782, after a legal battle over the two grants, the first grant was recognized and the original name of the town was resumed.

The town sits on a rich iron deposit, and the region once produced pig iron and bar iron for farm tools and cast iron ware.

Franconia is home to the Cannon Mountain Aerial Tramway, which rises to the 4,100-foot summit of Cannon Mountain. Built in 1938, it was the first passenger aerial tramway in North America. From the time of its construction in 1938 to its retirement in 1980, the original tramway carried 6,581,338 passengers to the summit of Cannon Mountain. The original tramway was replaced by a new 80-passenger tram in 1979. Construction and testing of the new tram were completed in February 1980, and the red and yellow tram cars are still running year-round today.

Around 1940, actress Bette Davis vacationed in Sugar Hill, the town bordering Franconia to the west. On a solo hike to Bridal Veil Falls at the western foot of Cannon Mountain, she got lost in the woods. Arthur Farnsworth, who worked at Peckett's Ski School, found her and rescued her from the woods. They fell in love and soon married. Farnsworth died unexpectedly as a result of freak accident in Los Angeles. Davis had erected in a rock on the trail to Bridal Veil Falls a plaque to commemorate Farnsworth, in which was inscribed the words "The Keeper of Stray Ladies," although Davis did not include her name in the plaque. The plaque can be seen today on the Coppermine Trail to Bridal Veil Falls. 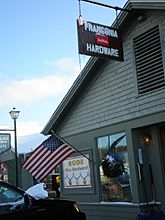 The town was home to Franconia College during the 1960s and 1970s. In the 21st century Franconia has been known as the home of skier Bode Miller who has accumulated several Olympic medals.

According to the United States Census Bureau, the town has a total area of 66.0 square miles (170.9 km2), of which 65.7 square miles (170.2 km2) is land and 0.3 square miles (0.8 km2) is water, comprising 0.47% of the town. Franconia is drained by the Pemigewasset River, the Gale River, and the Ham Branch of the Gale River, in addition to Lafayette Brook. The north-western two-thirds of Franconia lies within the Connecticut River watershed, while the south-eastern corner lies in the Merrimack River watershed.

The area of Franconia Notch is well known for its natural features, including Profile and Echo lakes, the Basin, Mount Lafayette, Mount Lincoln, and Cannon Mountain. Mount Lafayette, at 5,249 feet (1,600 m) above sea level, is the highest peak in Franconia. The Old Man of the Mountain, a profile-like cliff which inspired Nathaniel Hawthorne to write The Great Stone Face, collapsed on May 3, 2003.

In addition to the mountains around Franconia Notch, there are several other four-thousand footers within the town limits: Mount Garfield, Galehead Mountain, South Twin Mountain, and Owl's Head.

There were 384 households out of which 27.1% had children under the age of 18 living with them, 53.4% were married couples living together, 7.8% had a female householder with no husband present, and 36.7% were non-families. 28.9% of all households were made up of individuals and 8.6% had someone living alone who was 65 years of age or older. The average household size was 2.23 and the average family size was 2.76.

All content from Kiddle encyclopedia articles (including the article images and facts) can be freely used under Attribution-ShareAlike license, unless stated otherwise. Cite this article:
Franconia, New Hampshire Facts for Kids. Kiddle Encyclopedia.