The quarter, short for quarter dollar, is a United States coin worth 25 cents, one-quarter of a dollar. It has a diameter of .955 inch (24.26 mm) and a thickness of .069 inch (1.75 mm). The coin sports the profile of George Washington on its obverse, and its reverse design has changed frequently. It has been produced on and off since 1796 and consistently since 1831.

The choice of a quarter-dollar as a denomination—as opposed to the 1⁄5 more common elsewhere—originated with the practice of dividing Spanish milled dollars into eight wedge-shaped segments, which gave rise to the name "piece of eight" for that coin. "Two bits" (that is, two eighths of a piece of eight) is a common nickname for a quarter. 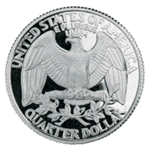 The reverse prior to the State Quarter Program

In 1999, the 50 State quarters program of circulating commemorative quarters began. These have a modified Washington obverse and a different reverse for each state, ending the former Washington quarter's production completely. On January 23, 2007, the House of Representatives passed H.R. 392 extending the state quarter program one year to 2009, to include the District of Columbia and the five inhabited US territories: Puerto Rico, Guam, American Samoa, the United States Virgin Islands, and the Commonwealth of the Northern Mariana Islands. The bill passed through the Senate and was signed into legislation by President George W. Bush as part of Pub.L. 110-161, on December 27, 2007. The typeface used in the state quarter series varies a bit from one state to another, but is generally derived from Albertus.

The current rarities for the Washington quarter "silver series" are:

Branch mintmarks are D = Denver, S = San Francisco. Coins without mintmarks are all made at the main Mint in Philadelphia. This listing is for business strikes, not proofs:

The 1940-D, 1936-D and the 1935-D coins, as well as many others in the series, are considerably more valuable than other quarters. This is not due to their mintages, but rather because they are harder to find in high grades (a situation referred to as "condition rarity"). Many of these coins are worth only melt value in low grades. Other coins in the above list are expensive because of their extremely low mintages, such as the 1932 Denver and San Francisco issues. The overstruck mintmark issues are also scarce and expensive, especially in the higher grades; even so they may not have the same popularity as overdates found in pre-Washington quarter series.

The 1934 Philadelphia strike appears in two versions: one with a light motto [for "In God We Trust"], which is the same as that used on the 1932 strikings, and the other a heavy motto seen after the dies were reworked. Except in the highest grades, the difference in value between the two is minor.

The "silver series" of Washington quarters spans from 1932 to 1964; during many years in the series it will appear that certain mints did not mint Washington quarters for that year. No known examples of quarters were made in 1933, San Francisco abstained in 1934 and 1949, and stopped after 1955, until it resumed in 1968 by way of making proofs. Denver did not make quarters in 1938. Proof examples from 1936 to 1942 and 1950 to 1967 were struck at the Philadelphia Mint; in 1968 proof production was shifted to the San Francisco Mint.

The mint mark on the coin is located on the reverse beneath the wreath on which the eagle is perched, and will either carry the mint mark "D" for the Denver Mint, "S" for the San Francisco Mint, or be blank if minted at the Philadelphia Mint.

The copper-nickel clad Washington quarter was first issued in 1965 and as part of the switch, the Denver mintmark was added in 1968, which did not reappear on any US coin denomination until 1968. During the early 1960s, the Federal government had been flooding the market with silver to keep the price down, and therefore keep US coins' intrinsic values from exceeding their face values. This was causing the level of silver in the US Reserves to reach dangerously low levels. Silver was estimated to only last another 3–5 years at the rate the Mint was manufacturing coins, so the US Congress authorized the Mint to research alternative materials for the silver denominations (dime, quarter dollar, half dollar, and dollar). The material chosen was a 75% copper/ 25% nickel cupronickel alloy (identical to that in the five-cent coin) clad to a core of "commercially pure" (99.5%) copper.

For the first three years of clad production, in lieu of proof sets, specimen sets were specially sold as "Special Mint Sets" minted at the San Francisco mint in 1965, 1966, and 1967 (Deep Cameo versions of these coins are highly valued because of their rarity).

Currently, there are few examples in the clad series that are valued as highly as the silver series but there are certain extraordinary dates or variations. The deep cameo versions of proofs from 1965 to 1971 and 1981 Type 2 are highly valued because of their scarcity, high grade examples of quarters from certain years of the 1980s (such as 1981–1987) because of scarcity in high grades due to high circulation and in 1982 and 1983 no mint sets were produced making it harder to find mint state examples, and any coin from 1981–1994 graded in MS67 is worth upwards of $1000.

The mint mark on the coin is currently located on the obverse at the bottom right hemisphere under the supposed date. In 1965–1967 cupro-nickel coins bore no mint mark; quarters minted in 1968–1979 were stamped with a "D" for the Denver mint, an "S" for the San Francisco mint (proof coins only), or blank for Philadelphia. Starting in 1980, the Philadelphia mint was allowed to add its mint mark to all coins except the one-cent piece. Twenty-five-cent pieces minted from 1980 onwards are stamped with "P" for the Philadelphia mint, "D" for the Denver mint, or "S" for San Francisco mint. Until 2012 the "S" mint mark was used only on proof coins, but beginning with the El Yunque (Puerto Rico) design in the America the Beautiful quarters program, the US Mint began selling (at a premium) uncirculated 40-coin rolls and 100-coin bags of quarters with the San Francisco mint mark. These coins were not included in the 2012 or later uncirculated sets or the three-coin ATB quarter sets (which consisted of an uncirculated "P" and "D" and proof "S" specimen) and no "S" mint-marked quarters are being released into circulation, so that mintages will be determined solely by direct demand for the "S" mint-marked coins.

In 2019, the West Point Mint released 2 million of each of the five designs that year with a "W" mint mark for general circulation, in a move intended to spur coin collecting. This was continued in 2020.

All content from Kiddle encyclopedia articles (including the article images and facts) can be freely used under Attribution-ShareAlike license, unless stated otherwise. Cite this article:
Quarter (United States coin) Facts for Kids. Kiddle Encyclopedia.