Old Man of the Mountain facts for kids

Kids Encyclopedia Facts
For other uses, see Old Man of the Mountain (disambiguation). 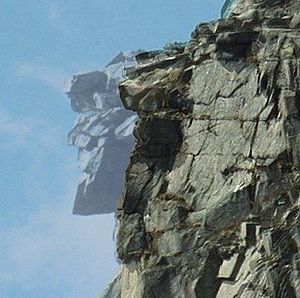 A composite image of the Old Man of the Mountain created from images taken before and after the collapse.

The Old Man of the Mountain, also known as the Great Stone Face or the Profile, was a series of five granite cliff ledges on Cannon Mountain in the White Mountains of New Hampshire, United States, that appeared to be the jagged profile of a face when viewed from the north. The rock formation was 1,200 feet (370 m) above Profile Lake, and measured 40 feet (12 m) tall and 25 feet (7.6 m) wide. The site is located in the town of Franconia.

The Old Man of the Mountain in the early 1900s 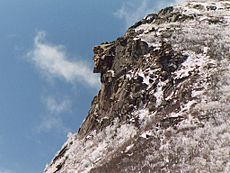 Old Man of the Mountain on April 26, 2003, seven days before the collapse 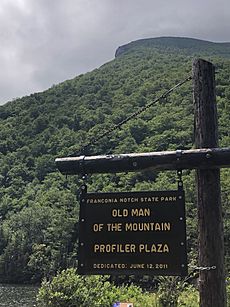 Site of the Old Man of the Mountain in August 2019; sign for Profiler Plaza in foreground 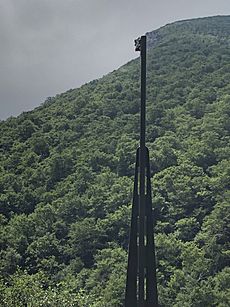 View via one of the "steel profilers" located in Profiler Plaza

Franconia Notch is a U-shaped valley that was shaped by glaciers. The Old Man formation was probably formed from freezing and thawing of water in cracks of the granite bedrock sometime after the retreat of glaciers 12,000 years ago. The formation was first noted in the records of a Franconia surveying team around 1805. Francis Whitcomb and Luke Brooks, part of the surveying team, were the first two to record observing the Old Man. The official state history says several groups of surveyors were working in the Franconia Notch area at the time and claimed credit for the discovery.

The Old Man first became famous largely because of statesman Daniel Webster, a New Hampshire native, who once wrote: "Men hang out their signs indicative of their respective trades; shoemakers hang out a gigantic shoe; jewelers a monster watch, and the dentist hangs out a gold tooth; but up in the Mountains of New Hampshire, God Almighty has hung out a sign to show that there He makes men."

The writer Nathaniel Hawthorne used the Old Man as inspiration for his short story "The Great Stone Face", published in 1850, in which he described the formation as "a work of Nature in her mood of majestic playfulness".

The profile has been New Hampshire's state emblem since 1945. It was put on the state's license plate, state route signs, and on the back of New Hampshire's Statehood Quarter, which is popularly promoted as the only US coin with a profile on both sides. Before the collapse, it could be seen from special viewing areas along Interstate 93 in Franconia Notch State Park, approximately 80 miles (130 km) north of the state's capital, Concord.

Freezing and thawing opened fissures in the Old Man's "forehead". By the 1920s, the crack was wide enough to be mended with chains, and in 1957 the state legislature passed a $25,000 appropriation for a more elaborate weatherproofing, using 20 tons of fast-drying cement, plastic covering and steel rods and turnbuckles, plus a concrete gutter to divert runoff from above. A team from the state highway and park divisions maintained the patchwork each summer.

Nevertheless, the formation collapsed to the ground between midnight and 2 a.m., May 3, 2003. Dismay over the collapse was so great that people visited to pay tribute, with some leaving flowers.

Early after the collapse, many New Hampshire citizens considered replacement with a replica. That idea was rejected by an official task force in 2003 headed by former Governor Steve Merrill.

In 2004, the state legislature considered, but did not accept, a proposal to change New Hampshire's state flag to include the profile.

In 2013, the board called a halt to further fundraising. They announced their intention to spend what was left on minor improvements and dissolve the board.

The memorial was completed in September 2020.

Other proposals that were considered but rejected include:

Timeline of the Old Man

The formation on a 1926 New Hampshire license plate

U. S. stamp issued in 1955. The plural version of the name is unusual. 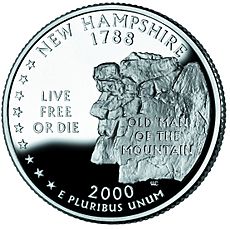 The reverse of the state quarter of New Hampshire features the Old Man of the Mountain, alongside the state motto "Live Free or Die". 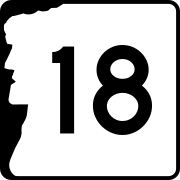 New Hampshire route markers continue to feature the profile of the Old Man of the Mountain.

Details of the history of the Old Man of the Mountain include:

All content from Kiddle encyclopedia articles (including the article images and facts) can be freely used under Attribution-ShareAlike license, unless stated otherwise. Cite this article:
Old Man of the Mountain Facts for Kids. Kiddle Encyclopedia.