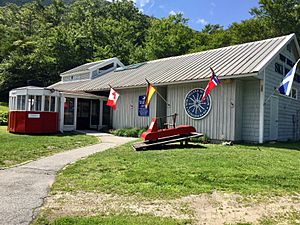 The New England Ski Museum is a non-profit operation in Franconia, New Hampshire.

Founded in 1977, in 1982 it moved into its permanent building near the tramway of Cannon Mountain ski area, in Franconia Notch State Park.

The museum was designed to preserve the history of commercial and recreational skiing, both alpine and cross-country, in the northeastern United States. It is one of four ski museums in the United States that are recognized by the United States Ski and Snowboard Association.

All content from Kiddle encyclopedia articles (including the article images and facts) can be freely used under Attribution-ShareAlike license, unless stated otherwise. Cite this article:
New England Ski Museum Facts for Kids. Kiddle Encyclopedia.