Coös County ( with two syllables), frequently spelled Coos County, is a county in the U.S. state of New Hampshire. As of the 2020 census, the population was 31,268, the least of any New Hampshire county. The county seat is Lancaster.

The two-syllable pronunciation is sometimes indicated with a diaeresis, notably in the Lancaster-based weekly newspaper The Coös County Democrat and on some county-owned vehicles. The county government uses both spellings interchangeably.

Coös County is part of the Berlin, NH–VT Micropolitan Statistical Area. It is the only New Hampshire county on the Canada–United States border, south of the province of Quebec, and thus is home to New Hampshire's only international port of entry, the Pittsburg–Chartierville Border Crossing. The only city in Coös County is Berlin, with the rest of the communities being towns, or unincorporated townships, gores and grants.

Coös County includes the northernmost part of the state. Major industries include forestry and tourism, with the once-dominant paper-making industry in sharp decline. The county straddles two of the state's tourism regions. The southernmost portion of the county is part of the White Mountains Region and is home to Mount Washington. The remainder of the county is known as the Great North Woods Region, or known locally as the North Country.

Coös County was separated from the northern part of Grafton County, New Hampshire and organized at Berlin December 24, 1803, although the county seat was later moved to Lancaster, with an additional shire town at Colebrook. The name Coös derives from the Algonquian word meaning "small pines".

During the American Revolutionary War two units of troops of the Continental Army — Bedel's Regiment and Whitcomb's Rangers — were raised from the settlers of Coös. From the Treaty of Paris of 1783 until 1835 the boundaries in the northern tip of the county (and New Hampshire itself) were disputed with Lower Canada (which was soon to become part of the Province of Canada), and for some years residents of the area formed the independent Republic of Indian Stream.

In the 1810 census there were 3,991 residents, and by 1870 there were nearly 15,000, at which point the entire county was valued at just under $USD 5 million, with farm productivity per acre comparing favorably with that of contemporary Illinois. Other early industries included forestry and manufacturing, using 4,450 water horsepower in 1870.

According to the U.S. Census Bureau, the county has a total area of 1,830 square miles (4,700 km2), of which 1,795 square miles (4,650 km2) is land and 35 square miles (91 km2) (1.9%) is water. It is the largest county in New Hampshire by area, and it is one of only two counties in the United States to share land borders with two different states and another country, along with Boundary County, Idaho.

Much of its mountainous area is reserved as national forest, wilderness, state parks and other public areas; these encompass most of the northern portion of the White Mountains, including all the named summits of the Presidential Range (though one, Mt. Webster's, lies about 200 feet (61 m) from the county line). Mt. Washington's peak is the highest in the Northeast. The 162-mile Cohos Trail runs the length of the county.

The principal state highways in Coös County are New Hampshire Route 16, which runs mostly parallel to the Maine state line, and New Hampshire Route 26, which traverses the Great Northern Woods from Vermont Route 102 southeast to Maine Route 26 towards Portland. The two major US Highways are US Route 2, which roughly bisects the county from Lancaster to the Oxford County line, and US Route 3, which runs from Carroll in the south to the Canada–US border at Pittsburg/Chartierville, where it continues as Quebec Route 257. 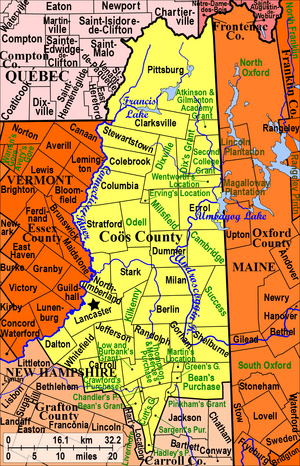 Modern town borders in Coös County, New Hampshire. Cities and towns are named in black and have town records. Green places are unincorporated, and do not keep records.

Robert Frost, who once lived in Franconia in neighboring Grafton County, wrote the poem "The Witch of Coös".

Coös County is the setting for the John Irving novel Last Night in Twisted River, Twisted River being a logging settlement in the county.

All content from Kiddle encyclopedia articles (including the article images and facts) can be freely used under Attribution-ShareAlike license, unless stated otherwise. Cite this article:
Coös County, New Hampshire Facts for Kids. Kiddle Encyclopedia.