Randolph is a heavily forested town in Coös County, New Hampshire, United States, extending from the northern slopes of the White Mountains of the Presidential Range (to the south) to the Crescent Range and Berlin (to the north), with U.S. Route 2 cutting through the middle. The northern and southern parts of Randolph are within the White Mountain National Forest and the Ice Gulch Town Forest, while the central part is the settled portion of town. As of the 2020 census, the town had a population of 328.

Randolph is part of the Berlin, NH–VT Micropolitan Statistical Area.

Randolph was incorporated in 1824, after being originally granted as "Durand" in 1772. The town was named after John Randolph, a Virginia congressman and senator, and a descendant of Pocahontas. 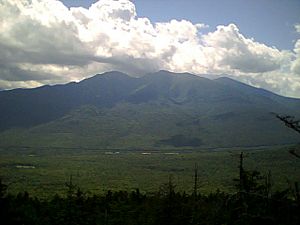 The northern peaks of the Presidential Range as seen from Mt. Crescent. Route 2 runs through the valley at the foot of Mounts Madison and Adams. Howker Ridge is to the far left. 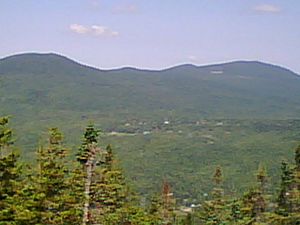 The Town of Randolph as seen looking north from Dome Rock showing part of the Crescent Range behind.

Randolph's geography is mountainous. The south side of the town includes the northern slopes of the Presidentials. The north side of the town includes four main mountains: Mount Crescent, Black Crescent Mountain, Mount Randolph and Pond Hill. Dividing the northerly slopes from the southerly slopes is US Route 2. There are no trails maintained to the top of Black Crescent Mountain or Pond Hill. The highest point in Randolph is on the town's southern border, atop a 3,950-foot (1,200 m) knob on Howker Ridge, a spur of Mount Madison.

The settled part of Randolph is divided into two main areas: Randolph "valley", where town hall is, and Randolph Hill, which has several roads all connected to a main road called Randolph Hill Road. Randolph Hill has the site of the Mt. Crescent House (hotel), which opened in 1883 as the "Randolph Hill House" and was torn down in 1971. Randolph also had "Ravine House" on Durand Road, straight north of the Appalachia trailhead. Other sections of town include the area west of Durand Road, which includes Valley Road and a number of houses along Route 2, towards Jefferson. The main Randolph train station was at Appalachia. Other, secondary stations included "Randolph East" on the Dolly Copp (or "Pinkham B") Road, and Bowman, at the height of land to the west. The only general store in Randolph is the Lowe's Store, on U.S. Route 2. There are two motels and one bed and breakfast within the town.

Temperatures in the summer can reach nearly 100 °F, though that is exceedingly rare, with summer days seldom getting above the 80's and summer nights frequently being in the 50's or even the 40's. Temperatures in the winter can be below -40°F.

There were 146 households, out of which 26.0% had children under the age of 18 living with them, 69.2% were married couples living together, 1.4% had a female householder with no husband present, and 28.1% were non-families. 24.0% of all households were made up of individuals, and 8.9% had someone living alone who was 65 years of age or older. The average household size was 2.31 and the average family size was 2.74.

Many houses in Randolph are summer/vacation homes. Historically, vacationers tended to visit the hotels, reachable by horse-drawn carriage from the Randolph train station; but as the automobile became more popular, the hotels declined and private vacation homes became more prevalent. Vacationing in the far north was particularly advantageous before the air conditioner became common, as Randolph summers are rarely very hot—and never hot at all in the higher mountain areas. The town has a strong group of people who spent entire summers there during the Depression and World War II era. These people all know each other well, and many have retired there. As they age and die off, though, the younger generation of vacationers, who can no longer afford six-week vacations, are less tightly knit. 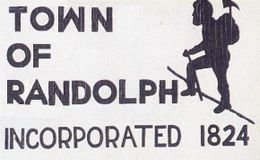 Randolph sign, seen when entering Randolph on U.S. Route 2 from the east or west.

Randolph is located in a mountainous region that attracts hikers. Because of this, the RMC (Randolph Mountain Club) was formed (see subsection below). The Randolph town sign (when entering and leaving Randolph through U.S. Route 2) is a picture of a person hiking. In some ways, this is the logo of Randolph. Trails in Randolph include the Mt. Crescent trail (leading to the top of Mt. Crescent), the Pasture Path, Grassy Lane, the Carlton Notch Trail, and many others. In 2003 a large section of the forest was turned into the Randolph Community Forest, which extends into the town of Jefferson. Wildlife in Randolph includes moose, deer, foxes, porcupines, snakes, and bears.

The Randolph Mountain Club (or RMC) is a non-profit organization that was founded in 1910 and incorporated in 1915 by John H. Boothman. As of 1997, there were over 750 members. The mission of the RMC is "to promote hiking and trail development" in Randolph. The club maintains a network of trails in the town, including on the northern slopes of the Presidential Mountains, within the inhabited sections of Randolph, and also on Mts. Randolph and Crescent.

The RMC finished work on the Four Soldiers Path in 2003, a path that connects with the Pasture Path and ends at the Pond of Safety, a pond where fugitive soldiers stayed during the American Revolution. (See RMC website).

The Randolph Mountain Club also organizes social events. For instance, there is an annual tea on the Fourth of July. There is also the annual picnic the third Saturday in August. The annual picnic is characterized by "The Charades." These so-called "charades" are actually skits where words are acted out. The town is divided into 3 teams: Hill, Midland, and Valley for these skits. Members of the teams prepare for a couple of weeks for the skits, choosing words, writing scripts, going to rehearsals. The picnic includes traditional round-singing.

The Randolph Mountain Club typically organizes two hikes per week in July and August, one difficult and one easier. Some work trips are also organized. Many community members have helped to maintain the trails.

There are two artificial lakes (or ponds) in Randolph; one is called Durand Lake and is present year round, while the other is known as the Ravine House Pool. The latter exists only in summer when it is created by damming up a mountain stream. The Ravine House Pool was previously used by the Ravine House, a defunct hotel, for swimming. There is still a small sandy beach at the pool, a dressing house, a water fountain, a raft, and a lifeguard station. There is also a playground area with swing set, slide, and small climbing structure nearby.

There are tennis courts near the Ravine House Pool, and also a table top tennis club on Randolph Hill Road.

All content from Kiddle encyclopedia articles (including the article images and facts) can be freely used under Attribution-ShareAlike license, unless stated otherwise. Cite this article:
Randolph, New Hampshire Facts for Kids. Kiddle Encyclopedia.