Jefferson is a town in Coos County, New Hampshire, United States. The population was 1,107 at the 2010 census. It is home to parts of the White Mountain National Forest in the south and northeast and to two theme parks: Santa's Village and Fort Jefferson Fun Park. There are also several private campgrounds, motels and inns.

Jefferson is part of the Berlin, NH–VT Micropolitan Statistical Area. 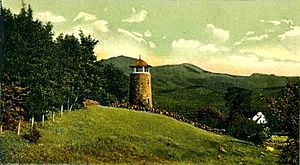 Colonial Governor Benning Wentworth first made land grants in this area in 1765, but the location was so deep in unexplored territory that few settlers took up their claims. So soon after the French and Indian War, in which certain Native American tribes in New England were allied with the French, English colonists did not want to be exposed on the frontier.

Colonel Joseph Whipple took a grant and cut trails through the forests to build a "manor" house. He named the town "Dartmouth" after William Legge, 2nd Earl of Dartmouth, the patron of Dartmouth College. Brother to William Whipple, a signer of the Declaration of Independence, Colonel Whipple renamed the town "Jefferson" four years prior to Thomas Jefferson's election as president. The state legislature granted the town a new charter as "Jefferson" in 1796.

In the mid-19th century, the boundary with the adjacent township of Kilkenny was moved so as to include that township's few residents in Jefferson. 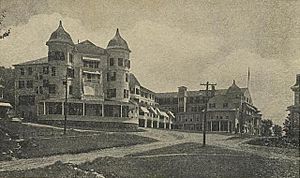 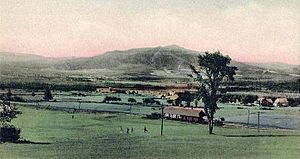 In 1885, a landslide on the north side of Cherry Mountain demolished the Stanley farm, mortally wounding a worker. Local hotels immediately arranged daily excursions to view the scene, now marked by a roadside historical marker. See New Hampshire Historical Marker 152.

Thaddeus S. C. Lowe, a local farm boy born in 1832, became a world-famous inventor of aerostats (dirigibles) and other devices. Consulting President Abraham Lincoln, he organized a balloon corps during the Civil War, and went on to invent the ice-making machine, and later the water-gas process. For years, the latter was used to fuel gas lights in hundreds of cities. His father, Clovis Lowe, had been part owner in 1832 of nearby Low and Burbank's Grant, which contains much of Mount Adams and Mount Madison. See New Hampshire Historical Marker 19.

During the early 1900s, Jefferson was a popular summer resort, boasting one of the largest "grand hotels" in the White Mountains—the Waumbek, with accommodations for nearly 300 guests. The hotel had its own rail branch, to deliver guests directly to the hotel from Boston and New York without changing trains. It was destroyed by fire on May 9, 1928.

At tourism's peak, Jefferson had over 30 inns and boarding houses, accessible by several mainline depots, including Riverton, Baileys, Meadows, and Highlands. Some of the original station buildings remain, although most have been moved to nearby locations. The tracks were removed in the 1920s. The wider ownership of automobiles gave people more choices for vacation destinations, and the Great Depression reduced vacations for years. By the end of this period, many people sought other venues than grand hotels.

A number of historic, architecturally interesting structures remain from the resort era. The Waumbek Cottages provided a backdrop for the popular White Mountains Festival of the Arts until 1979. In March 2006, the Waumbek Cottages Historic District was listed in the National Register of Historic Places.

In 1988 and 1989, Jefferson gained national attention when a local volunteer firefighter was charged and tried in connection with dozens of arson fires that had plagued the area. The defendant was acquitted at trial. 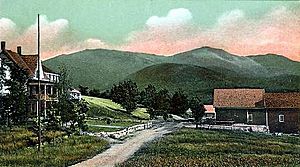 Jefferson is located on U.S. Route 2 between Lancaster and Randolph, near the midpoint between the Vermont and Maine borders. Set astride the broad Israel River valley, the town commands remarkable views of the Presidential Range and other White Mountain summits. Mount Starr King, with an elevation of 3,907 feet (1,191 m) above sea level and named for Thomas Starr King, is the highest point in town, near the town's northern border. It is regularly traversed by hikers scaling nearby 4,006-foot (1,221 m) Mount Waumbek, one of the "four-thousand footers"—the 48 peaks above 4,000 feet (1,200 m) in New Hampshire. Jefferson lies fully within the Connecticut River watershed.

In the past few years, thousands of acres of Jefferson have been sold or donated by private interests to the White Mountain National Forest. These include the Randolph Town Forest, a part of which is within the boundaries of Jefferson, the Silvio O. Conte National Fish and Wildlife Refuge, and Mount Starr King. 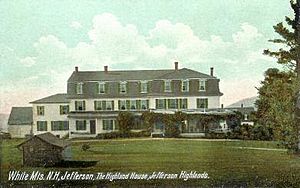 There were 407 households out of which 28.0% had children under the age of 18 living with them, 62.4% were married couples living together, 5.2% had a female householder with no husband present, and 27.5% were non-families. 20.4% of all households were made up of individuals and 6.9% had someone living alone who was 65 years of age or older. The average household size was 2.47 and the average family size was 2.84. 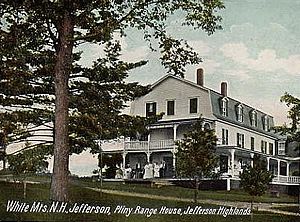 All content from Kiddle encyclopedia articles (including the article images and facts) can be freely used under Attribution-ShareAlike license, unless stated otherwise. Cite this article:
Jefferson, New Hampshire Facts for Kids. Kiddle Encyclopedia.