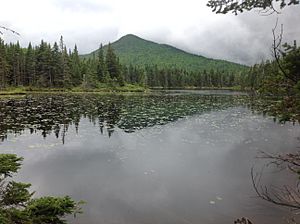 A view of Unknown Pond with The Horn in the background, both of which are popular hiking destinations within the township.

In New Hampshire, locations, grants, townships (which are different from towns), and purchases are unincorporated portions of a county which are not part of any town and have limited self-government (if any, as many are uninhabited).

It was named after the town and county of Kilkenny in Ireland.

Kilkenny is located entirely within the boundaries of the White Mountain National Forest and is home to Mount Waumbek and Mount Cabot of the Pilot Range, each over 4,000 feet (1,200 m) high (see Four-thousand footers), as well as several other peaks over 3,000 feet (910 m). The summit of Mount Cabot is the highest point in Kilkenny, at 4,160 feet (1,270 m) above sea level.

Kilkenny is bordered to the south and west by Jefferson, to the west by Lancaster, to the north by Stark, and to the east by Berlin and Milan. The West Branch of the Upper Ammonoosuc River originates on the eastern slope of the Pilot Range.

Kilkenny Township once included a large portion of what is now the eastern edge of Jefferson, tapering south into the area of Jefferson Notch at the foot of Mount Mitten. This included much of the area known as "Jefferson Highland" on the Portland Road (US-2). By the 1870s, maps were showing the southern edge of Kilkenny as a line extending the northern border of Jefferson and Lancaster (1872 Railroad and Post Office Map of New Hampshire, and 1892 map of Jefferson). The 1896 topographic map, however, shows that the boundary had again been adjusted several miles south, to include Mount Waumbek and Pliny Mountain, uninhabited areas. Deeds in this area often refer to the "Kilkenny Addition".

On the 1935 topographic map, the "Upper Ammonoosuc Trail" crossed Kilkenny along Priscilla Brook and through the pass from the Keenan Brook area of Randolph, north of Pliny Mountain. This trail has since been abandoned, although a 2002 atlas of New Hampshire shows a "Priscilla Brook Trail" in the same location.

The Willard Bowl north of Mount Waumbek, drained by Garland Brook, was considered as a site for development of a ski area in 1971, when it was owned by former governor Hugh Gregg. On the 1896 topographic map there was a B&M railroad spur up much of Garland Brook, to an elevation of 2,100 feet (640 m). By 1935 the tracks were gone.

As of the census of 2010, there were no people living in the township.

All content from Kiddle encyclopedia articles (including the article images and facts) can be freely used under Attribution-ShareAlike license, unless stated otherwise. Cite this article:
Kilkenny, New Hampshire Facts for Kids. Kiddle Encyclopedia.