Milan ( MY-lən) is a town in Coös County, New Hampshire, United States. The population was 1,358 at the 2020 census. It is part of the Berlin, NH–VT Micropolitan Statistical Area. 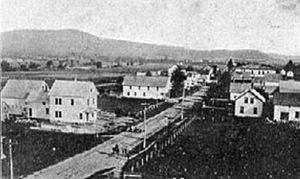 Milan village in the 19th century

Originally named Paulsburg in 1771 after Paul Wentworth, the town was incorporated on December 16, 1824. In that year, Governor Levi Woodbury authorized a name change to Milan, in honor of Milan Harris.

Prior to 1820 there were but few inhabitants. In 1819 the population was about fourteen; ten years passed and the number had increased four-fold. Like the other towns around it, Milan's first industries were lumbering operations, and agriculture was for some time subordinate to this. The firms farms were developed on Milan hill. The soil was warmer, more free from frost, and, for some years, produced quite liberally in response to the labors of the pioneers. But they were not permanently as productive as they gave promise, and many of those settlers who remained south the most valuable lands along the river. Some of the names of the early pioneers of Milan include Ellingwood, Hodgdon, Fogg, Hinds, Roberts, Hagar, Sargent, Nay, Twitchell, and Newell.

There were 532 households, out of which 31.8% had children under the age of 18 living with them, 62.4% were married couples living together, 5.5% had a female householder with no husband present, and 26.9% were non-families. 21.4% of all households were made up of individuals, and 7.9% had someone living alone who was 65 years of age or older. The average household size was 2.50 and the average family size was 2.92.

All content from Kiddle encyclopedia articles (including the article images and facts) can be freely used under Attribution-ShareAlike license, unless stated otherwise. Cite this article:
Milan, New Hampshire Facts for Kids. Kiddle Encyclopedia.