Dummer is a town in Coos County, New Hampshire, United States. The population was 304 at the 2010 census. It is part of the Berlin, NH–VT micropolitan statistical area. Dummer is home to the Pontook Reservoir, popular with canoeists, kayakers and birdwatchers.

The town was granted on March 8, 1773 by Governor John Wentworth to a group of wealthy Portsmouth investors, including his father, Mark Hunking Wentworth, Nathaniel Haven and others. He named it after Massachusetts Governor William Dummer, who successfully defended the eastern English provinces from the French and Indians in Dummer's War. But the town remained unsettled until 1812 when William Leighton arrived from Farmington with his family. Dummer was incorporated by the General Court on December 19, 1848. 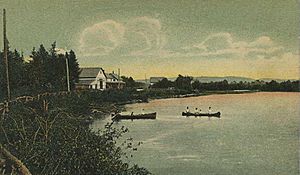 Mountainous terrain and sterility of the soil prevented cultivation. But the region had forests, and the Upper Ammonoosuc River provided water power for mills. There were two sawmills operating by 1859, with a considerable trade in timber. Log drives on the Androscoggin River supplied the papermills downstream in Berlin. Pontook Dam, which created Pontook Reservoir, was reconstructed in the mid-1980s to generate hydroelectric power.

According to the United States Census Bureau, the town has a total area of 49.5 square miles (128 km2), of which 48.2 square miles (125 km2) is land and 1.2 square miles (3.1 km2) is water, comprising 2.43% of the town. The highest point in Dummer is the summit of Cow Mountain, at 2,289 feet (698 m) above sea level. Roughly the western third of Dummer lies within the Connecticut River watershed, where it is drained by the Upper Ammonoosuc River, with the eastern two-thirds in the Androscoggin River watershed.

There were 128 households out of which 30.5% had children under the age of 18 living with them, 64.8% were married couples living together, 10.9% had a female householder with no husband present, and 20.3% were non-families. 19.5% of all households were made up of individuals and 5.5% had someone living alone who was 65 years of age or older. The average household size was 2.40 and the average family size was 2.73.

All content from Kiddle encyclopedia articles (including the article images and facts) can be freely used under Attribution-ShareAlike license, unless stated otherwise. Cite this article:
Dummer, New Hampshire Facts for Kids. Kiddle Encyclopedia.