Errol is a town in Coos County, New Hampshire, United States. The population was 291 at the 2010 census. It is located north of the White Mountains along Route 16 at the intersection of Route 26. It has a municipal airport with a single, unpaved runway (airport code ERR).

Errol is part of the Berlin, NH–VT micropolitan statistical area. 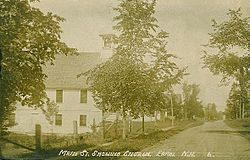 Errol was granted by Governor John Wentworth to Timothy Ruggles and others in 1774, the name taken from Scotland's James Hay, 15th Earl of Erroll. In 1789, proprietors of the Errol grant petitioned the General Court that towns between Conway and Errol be required to pay for "a good connecting road." The legislature approved the measure in 1781, mandating what is today Route 16. A winter trade route to Andover, Maine was built in 1804, connecting Errol to Portland by what is now Route 26. The first settlers arrived at Errol in 1806, and by 1820 the population was 36. It was incorporated in 1836.

Although the soil was considered generally poor, it was suitable for hay, oats and potatoes. With vast forests, the town's chief occupation was lumbering. By 1859, when the population was 130, the town had two sawmills, one gristmill and one clapboard machine.

According to the United States Census Bureau, the town has a total area of 69.8 square miles (181 km2), of which 60.6 square miles (157 km2) is land and 9.1 square miles (24 km2) is water, comprising 13.07% of the town. The Androscoggin River begins in Errol, where the Magalloway River joins the outlet of Umbagog Lake. The town's elevation reaches 2,350 feet (720 m) above sea level atop a bump above Signal Pond near the town's western boundary. Errol lies fully within the Androscoggin River watershed.

This climatic region has large seasonal temperature differences, with warm to hot (and often humid) summers and cold (sometimes severely cold) winters. According to the Köppen Climate Classification system, Errol has a humid continental climate, abbreviated "Dfb" on climate maps.

There were 137 households out of which 19.7% had children under the age of 18 living with them, 60.6% were married couples living together, 2.2% had a female householder with no husband present, and 34.3% were non-families. 24.8% of all households were made up of individuals and 9.5% had someone living alone who was 65 years of age or older. The average household size was 2.15 and the average family size was 2.56.

All content from Kiddle encyclopedia articles (including the article images and facts) can be freely used under Attribution-ShareAlike license, unless stated otherwise. Cite this article:
Errol, New Hampshire Facts for Kids. Kiddle Encyclopedia.