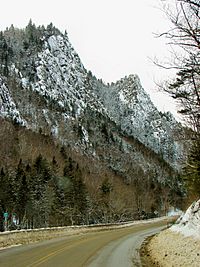 Dixville is a township in Coos County, New Hampshire, United States. In New Hampshire, locations, grants, townships (which are different from towns), and purchases are unincorporated portions of a county which are not part of any town and have limited self-government (if any, as many are uninhabited).

The population was 12 at the 2010 census. Dixville is the location of the Dixville Notch State Park and The Balsams Grand Resort Hotel. It is part of the Berlin, NH–VT micropolitan statistical area.

Dixville Notch from Profile Cliff in 1913

Dixville was granted by the legislature to Timothy Dix, Jr., in 1805 and contained about 29,340 acres (118.7 km2); the price was $4,500. It was organized for voting purposes in 1960, and the village of Dixville Notch is commonly known as the first place to cast votes in U.S. elections. The original grant included the eastern portion (north of Wentworth's Location) now known separately as Dix's Grant.

The township is served by New Hampshire Route 26.

There were 10 households, all composed of married couples living together, and 40.0% of which had children under the age of 18 living with them. No households were made up of individuals. The average household and family size was 2.80.

All content from Kiddle encyclopedia articles (including the article images and facts) can be freely used under Attribution-ShareAlike license, unless stated otherwise. Cite this article:
Dixville, New Hampshire Facts for Kids. Kiddle Encyclopedia.