Conway is a town in Carroll County, New Hampshire, United States. It is the most populous community in the county, and the most populous in the state north of Hanover. The population was 10,115 at the 2010 census, more than 1/5 of the total population of Carroll County. Parts of the White Mountain National Forest are in the west and north of the town. Cathedral Ledge (popular with climbers) and Echo Lake State Park are in the west. Villages within the town include Conway, North Conway, Center Conway, Redstone and Kearsarge, as well as a portion of the village of Intervale. 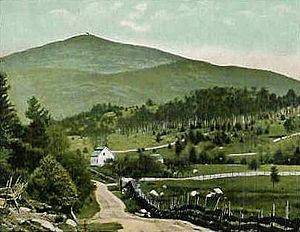 The region was once home to the Pequawket Indians, an Algonquian Abenaki tribe. Along the Saco River they fished, hunted or farmed, and lived in wigwams sheltered within stockades. In 1642, explorer Darby Field of Exeter paddled up the Saco in a canoe, and would report seeing "Pigwacket," an Indian community stretching from present-day Conway to Fryeburg, Maine. The Pequawket tribe dwindled from disease, probably smallpox brought from abroad. In May 1725, during Dummer's War, 36 men from Dunstable, Massachusetts led by John Lovewell skirmished with the Pequawket. The Pequawket losses are not known but the result of the day's battle was the withdrawal of the tribe from the area.

In 1765, Colonial Governor Benning Wentworth chartered sixty-five men to establish "Conway", named for Henry Seymour Conway, Commander in Chief of the British Army. To keep his land, a settler had to plant 5 acres (20,000 m2) for every fifty in his share, and to do it within five years. The first roads were built in 1766. Construction of the first meetinghouse began at Redstone. Never completed, it could only be used in summer, with services held whenever a minister visited. Eventually, the partly finished meetinghouse was moved to Center Conway. In 1775, the town raised small sums to build two schoolhouses, one in North Conway. By 1849, however, the town had twenty school districts.

By the middle-19th century, artists had discovered the romantic beauties of the White Mountains, and "Artist Falls Brook" became a favorite setting for landscape paintings. King Edward VII would buy twelve White Mountain paintings to hang in Windsor Castle. Among the artists to work here were Asher B. Durand and Benjamin Champney, the latter known to paint Mount Washington while sitting in the middle of Main Street. 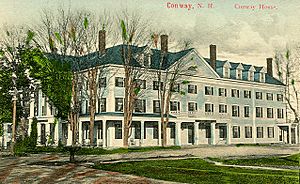 The Portsmouth, Great Falls & Conway Railroad entered Conway in 1871. The railroad would be bought by the Boston & Maine, and joined in town by rival Maine Central. They transported freight, mostly wood and wood products, away from Conway, and they brought tourists. Numerous inns and taverns were built in the 19th and 20th centuries, and tourism remains today a principal business. The first ski trail began operating in 1936 at Mount Cranmore, where Hannes Schneider of Austria would provide instruction starting in 1939. In 1959, the Kancamagus Highway opened, connecting Conway with Lincoln. It travels through Kancamagus Pass, named for a Pennacook chief, and at 2,850 feet (870 m) above sea level is the highest paved through-road in New Hampshire.

Since the 1930s, the population of the nearby city of Berlin has decreased significantly, from 20,018 in 1930 to 10,051 in 2010. This decline, coupled with the population increase in Conway and the surrounding community, has led to higher levels of economic development in the Conway area than the rest of northern New Hampshire. Conway has both a tourism-based economy and service economy. As of 2002, the largest employer in the town was Memorial Hospital, employing 350 people, followed by the Conway School District, Hannaford Bros. Co., Red Jacket Resorts, and Walmart.

Conway is divided into a number of separate villages. The largest and best known is North Conway, a popular destination for outlet shopping.

The villages of Conway include:

This article describes the town of Conway as a whole. Additional demographic detail is available which describes only the central settlement or village within the town, although that detail is included in the aggregate values reported here. See: Conway (CDP), New Hampshire. 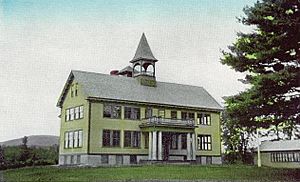 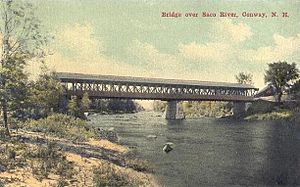 Bridge over Saco River in 1911

Located in the center of the popular White Mountain National Forest, Conway is the major commercial center for Bartlett, Jackson, Madison, Chatham, Eaton, Hart's Location, and Albany, New Hampshire as well as Fryeburg, Brownfield, Lovell, and Stow, Maine. There are a number of restaurants, two breweries, the year-round Cranmore Mountain Resort, over a hundred local and national stores, and several museums and theatres.

Arts in Motion Theater Company is resident at the Eastern Slope Inn. M&D Productions is a local community theater group.

The Mount Washington Observatory's Weather Discovery Center, located in downtown North Conway, provides information and interactive exhibits on Mount Washington and the weather that surrounds it, and affords visitors the opportunity to video-conference with observers on the summit.

All content from Kiddle encyclopedia articles (including the article images and facts) can be freely used under Attribution-ShareAlike license, unless stated otherwise. Cite this article:
Conway, New Hampshire Facts for Kids. Kiddle Encyclopedia.