North Conway is a census-designated place (CDP) and village in eastern Carroll County, New Hampshire, United States. The population was 2,116 at the 2020 census. A year-round resort area, North Conway is the second-largest village within the town of Conway, after the village of Conway proper. The White Mountain National Forest is to the west and north. Conway is home to Cathedral Ledge (popular with climbers), Echo Lake State Park, and Cranmore Mountain Resort. North Conway is known for its large number of outlet shops. 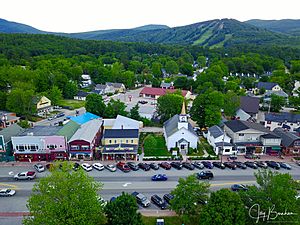 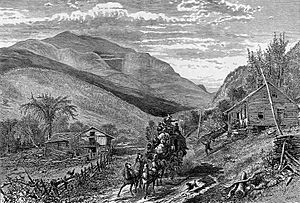 Chartered in 1765 by Colonial Governor Benning Wentworth, the town is named for Henry Seymour Conway, ambitious son of a prominent English family, who was elected to the House of Commons at age 20, fought at Culloden, and became Secretary of State. Early settlers called the area Pequawket (known colloquially as Pigwacket), adopting the name of the Abenaki Indian village which stretched down the Saco River to its stockaded center at Fryeburg, Maine.

North Conway is in the White Mountains, with Mount Washington to the northwest. The rugged terrain became popular in the 19th century with artists. Their paintings were known collectively as White Mountain art, which in turn attracted tourists to the area, particularly after the Portsmouth, Great Falls & Conway Railroad extended service in 1872 to North Conway. In 1874, the line built a Second Empire depot, designed by Nathaniel J. Bradlee. In 1932, "snow trains" began carrying enthusiasts to "the birthplace of American skiing," as North Conway is known.

Increasing automobile travel brought the decline of trains. The railroad, then part of the Boston & Maine, abandoned passenger service to the area in 1961 and freight service in 1972. Subsequently, the Conway Scenic Railroad was established. Today, the line offers visitors a tour of the region, including Crawford Notch. The station is listed on the National Register of Historic Places.

In the late 1980s, the White Mountain Airport closed and was redeveloped as a large outlet mall called Settlers' Green Outlet Village. Continued growth through the 1990s and 2000s in North Conway and the villages nearby made Conway the most populous community in Carroll County. Traffic congestion led to an overhaul of the road system, including widening Route 16 through North Conway village and constructing a road parallel to Route 16 to allow traffic to move between Redstone and Intervale uninterrupted. A bypass of the area is being developed.

North Conway remains a popular destination due to its shopping, recreation, and attractions. 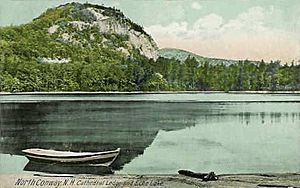 North Conway and its surrounding towns offer hiking in the White Mountain National Forest. The area is a major rock climbing destination in the northeastern United States, particularly Cathedral Ledge in Echo Lake State Park. The 500-foot (150 m) cliff overlooks Echo Lake and North Conway from the west. Unlike nearby White Horse Ledge, another rock climbing site, Cathedral Ledge has an automobile road to the summit, which provides fine views of the Saco River Valley.

In late September through early October, tourists arrive to see the autumn colors on the surrounding mountains and forests. The Conway Scenic Railroad features train rides that leave from the village's Victorian station. In the winter, the village is the nighttime destination for skiers visiting the area resorts, including North Conway's own Cranmore Mountain as well as nearby Attitash Resort, Black Mountain and Wildcat Mountain. 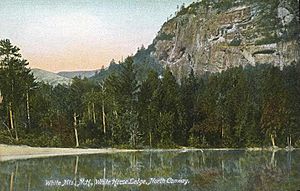 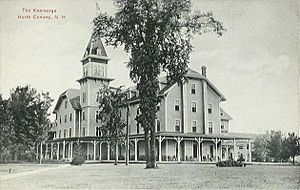 Sites on the National Register of Historic Places:

All content from Kiddle encyclopedia articles (including the article images and facts) can be freely used under Attribution-ShareAlike license, unless stated otherwise. Cite this article:
North Conway, New Hampshire Facts for Kids. Kiddle Encyclopedia.