The Conway Scenic Railroad (reporting mark CSRX) is a heritage railroad in North Conway, New Hampshire, United States, owned by Profile Mountain Holdings Corp. The railroad operates over two historic railway routes: a line from North Conway to Conway that was formerly part of the Conway Branch of the Boston and Maine Railroad, and a line from North Conway through Crawford Notch to Fabyan that was once part of the Mountain Division of the Maine Central Railroad. The Conway line is owned by Conway Scenic, and the Mountain Division is owned by the State of New Hampshire.

The railroad's main terminal is located in historic downtown North Conway in the Mount Washington valley. The station complex has been listed on the National Register of Historic Places since 1979.

The Conway Scenic Railroad was founded by local businessmen Bill Levy and Carroll Reed and by Boston and Maine Railroad employee Dwight Smith. A few years after the Boston & Maine (B&M) ended passenger service on the Conway branch in 1961, Levy and Reed formed the North Conway Depot Company and purchased the station and land that made up the North Conway rail yard, with the railroad retaining ownership of the tracks and rights to operate on the still-active line with freight trains. In 1967, Smith purchased Engine 7470 and started searching for a place to restore and operate it. As early as 1968, word started to spread that the B&M was looking to abandon the Conway Branch, and in a 1968 railfan-charted "Snow Train" (round trip Boston to North Conway/Intervale) that Smith was a part of, saw what North Conway had for facilities. Shortly after, a meeting was held with Levy and Reed where a handshake agreement was made and the beginnings of a railroad were underway. In 1969 the B&M petitioned the Interstate Commerce Commission to abandon the line north of Ossipee. The abandonment was approved in late September 1972, with the last train pulling out of North Conway on October 31 of that year. With terms and agreements finally completed with the B&M, in May 1974 the North Conway Depot Company was dissolved and the Conway Scenic Railroad was born. They purchased the rail line starting at the Conway/Albany town line, ending at the junction with the Maine Central in Intervale, a distance of 7 miles (11 km). The first train was run on August 4, 1974.

In 1983, bridge traffic on the Mountain Division ended, with traffic being diverted south over the B&M. Local freight service out of Portland to North Conway continued until the 1986 railroad union strike. From that point on, the Conway Scenic had no connection to the wider United States rail network. In 1992 Guilford Transportation abandoned the Mountain Division from the Maine state line, to Whitefield, New Hampshire, and sold the line to the state of New Hampshire, in early 1994. On September 1, 1994, the Conway Scenic obtained an operating lease from Bolton Hill Road in Redstone (a village of Conway) to Hazen Road in Whitefield, giving the railroad a connection to the national network again at Whitefield. Work to clear and rehabilitate the tracks commenced immediately, and on December 17, 1994, the first train to Bartlett was run, with operations through Crawford Notch starting on September 5, 1995. The first train to Fabyan Station was run on September 1, 1996. Expansions east to Redstone and west to Hazen Road in Whitefield were added on June 27, 1998, but those two points have only been used for special runs. In 2018, at the request of the railroad, the state adjusted the railroad's lease, adding an additional mile (1.6 km) of rail line east of Redstone, ending at the Saco River bridge. Upon completion of refurbishing the track, the first train was run on May 13, 2019. This marked the first expansion the railroad had seen since 1998.

In 1999 the original owners were bought out by husband and wife Russ and Dot Seybold, and on January 30, 2018, the railroad was sold again to Profile Mountain Holdings Corp. 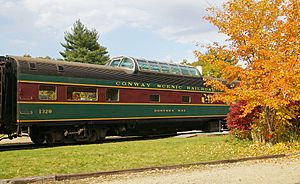 The railroad operates excursions of varying duration, generally under two banners, the Heritage Excursions and the Mountaineer:

The Heritage Excursions – running either south to Conway (55-minutes round trip) or west to Bartlett (1¾-hours round trip). The Heritage train includes the dining car Chocorua; the 1898 open-deck Pullman observation car Gertrude Emma, which is the oldest active standard gauge passenger car in the country; a former Boston & Maine heavyweight coach converted to an open-air car; and several restored heavyweight coaches, some dating back to the 1920s. The schedule varies year to year, but typically the trains to Conway operate mid-April through the end of December and the Bartlett trains operate early May through mid-November.

The Mountaineer – covering the line through Crawford Notch, is typically a 5-hour round trip to Crawford Depot (located at the height of land in Crawford Notch), but is extended 5½ hours during the fall foliage season, when the train travels beyond Crawford Depot to Fabyan Station at Bretton Woods in the town of Carroll. The Notch Train includes an open-air car (Silver Cascade #1308), a 21+ first-class vista dome dining & lounge car (Rhonda Lee), a first-class vista dome car (Dorthea Mae), a first-class car (Carroll P. Reed), a first-class dining car (Hattie Evans) and commuter coaches retired from the Montreal commuter pool, one of which was converted to a "Café table car" for passengers riding in coach. Like the Valley Trains, the schedule varies year to year but typically operates mid-June through late-October to early-November.

The Sunset Dinner Train – typically operating mid-June through mid-October on select weeknights and weekend nights. It is a 1¾-hour round trip excursion to Bartlett. Special dinner trains of varying lengths include the Murder Mystery Dinner Trains and the Cupid Express, a Valentine's dinner train in February. Although the dinner train is a Heritage Excursion, the Mountaineer trainset is the one offered for this service.

Annual special events at the railroad include but are not limited to: Mother's Day & Father's Day specials, Trains Planes & Automobile Special (part of an air show event at the Whitefield Airport), Autism Spectrum Specials, Military & First Responders Appreciation Days, Railfans' Weekend, Johnny Appleseed Express, Pumpkin Patch Express, Journey to the North Pole (themed after the Polar Express), and "Steam in the Snow" (or "Covered Wagon in the Snow" when 7470 is not available), which is a photographers' special in early January, sponsored by the Massachusetts Bay Railroad Enthusiasts. The railroad used to host a "Day Out With Thomas" [the Tank Engine], but the event has been discontinued.

Snow Trains started in February 2020 and operate over the two February school vacation weeks, for Massachusetts and New Hampshire respectively. These are shuttle trains that run daily every 90 minutes from North Conway to Attitash Mountain Resort in Bartlett and back, starting at 7:30am and making a total of seven round trips per day. Starting in January 2021, the railroad announced the addition of weekend shuttle trains to and from Attitash, for the winter. This marks the start of the railroad becoming a year round operation, a feat that was only attempted once, in 1976.

On June 20, 2009, a 20-axle Schnabel car was brought down through Crawford Notch carrying a 227-ton transformer for Public Service of New Hampshire, an electrical utility company. The train was lead by 573, 6505 & 6516 It was the first scheduled freight train through Crawford Notch since September 3, 1983, the first freight train of any kind since October 1984. The empty cars where shipped out 9 days later led by 6505 & 4266. This shipment completed the first and only revenue freight move for the Conway Scenic to date.

In the 2005 Christmas television film, The 12 Dogs of Christmas, starring Jordan-Claire Green, the museum's depot was filmed in several scenes during the beginning of the film, and the Conway Scenic's passenger cars were also used in the film.

All content from Kiddle encyclopedia articles (including the article images and facts) can be freely used under Attribution-ShareAlike license, unless stated otherwise. Cite this article:
Conway Scenic Railroad Facts for Kids. Kiddle Encyclopedia.