Bartlett is a town in Carroll County, New Hampshire, United States. The population was 3,200 at the 2020 census, up from 2,788 at the 2010 census. Bartlett includes the unincorporated community of Glen as well as portions of the communities of Kearsarge and Intervale, which the town shares with the neighboring town of Conway. It is set in the White Mountains and is surrounded by the White Mountain National Forest. It is home to the Attitash Mountain Resort and the Story Land theme park.

The main village in town, where 351 people resided at the 2020 census, is defined by the U.S. Census Bureau as the Bartlett census-designated place and is located at the intersection of U.S. Route 302 with Bear Notch Road (Albany Avenue). 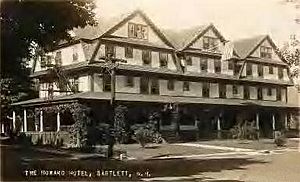 Settled after 1769 and incorporated in 1790, the town is named for Dr. Josiah Bartlett, the first chief executive to bear the name governor, a representative to the Continental Congress, and one of New Hampshire's three signers of the Declaration of Independence, placing his name directly under that of John Hancock. Dr. Bartlett founded the New Hampshire Medical Society in 1791. Bartlett became a railroad town in 1875 when the Maine Central Railroad's Mountain Division was built. In 1954, Story Land, a theme park designed for young children, opened in Glen. Attitash ski area opened in the 1960s.

The Bartlett Roundhouse in Bartlett village was listed on the National Register of Historic Places in September 2015.

Bartlett's views of the White Mountains have long made tourism a principal business. The town has one covered bridge. Attitash ski area is the second largest ski area in New Hampshire. Bartlett also is home to the Bear Notch Ski Touring area affording Nordic ski enthusiasts trails in the upper Saco River Valley. Bartlett is also an attraction for railfans. The Conway Scenic Railroad, a heritage railway in nearby North Conway, operates a train to the town daily for sightseeing in the spring, summer, and fall.

In addition to the town center, Bartlett includes the following villages within its limits:

Goodrich Falls on the Ellis River is in the northern part of the town, next to NH 16. 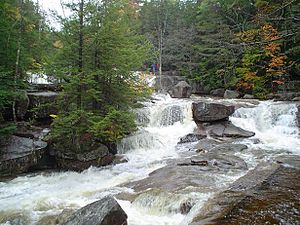 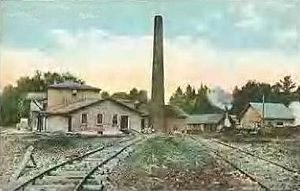 The West Wing television series contains a character named Josiah Bartlet, a fictional descendant of the real Josiah Bartlett for whom this town is named.

All content from Kiddle encyclopedia articles (including the article images and facts) can be freely used under Attribution-ShareAlike license, unless stated otherwise. Cite this article:
Bartlett, New Hampshire Facts for Kids. Kiddle Encyclopedia.