Josiah Bartlett (November 21, 1729–May 19, 1795), was an American physician and statesman who, as a delegate to the Continental Congress for New Hampshire, signed the Declaration of Independence. He was later Chief Justice of the New Hampshire Supreme Court and Governor of the state. 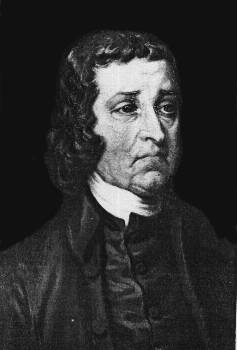 Josiah was born in Amesbury, Massachusetts to Stephen and Hannah (Webster) Bartlett. He was their fifth child and fourth son. He attended the common schools, but with uncommon success. By the age of sixteen, by study, he had also built a foundation in Latin and learned some Greek. In 1745 he began the study of medicine, working in the office of Dr. Ordway of Amesbury. Before he turned twenty-one, in 1750, he moved to Kingston, New Hampshire in Rockingham County, hung out his shingle and began his practice.

Kingston at that time was a frontier settlement of only a few hundred families. If a man could stitch wounds, set bones, and treat fevers, he was welcome, even without formal educational credentials. Dr. Bartlett could, and as the only Doctor in this part of the county, his practice prospered. He purchased land and added a farm to his credit.

On January 15, 1754 he married Mary Bartlett of Newton, New Hampshire. They would remain a devoted couple until her death in July 14, 1789. Over the years they would have eleven children. All three of his sons and five of his grandsons would follow him as physicians.

Although he remained in the state after 1778, in 1779 he returned to his role as a Judge, serving in the Court of common pleas. Then in 1782 he was appointed to the New Hampshire Supreme Court in spite of not being a lawyer. Indeed, some contemporary lawyers held the view that justice was never better than when the senior judges knew little legal history.

In 1788 Bartlett was made the Chief Justice of the state's supreme court. That same year he was a delegate to the New Hampshire convention for adoption of the Constitution, serving part of the time as is Chairman. He argued forcefully for ratification, which finally took place on June 21, 1788. The legislature of the new State of New Hampshire, selected him to be a U. S. Senator, but he declined the office. 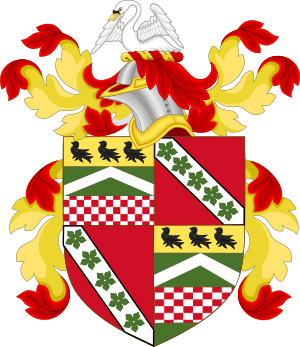 Coat of Arms of Josiah Bartlett

In 1790 Josiah's lifetime of contribution received its highest recognitions. He secured legislation recognizing the New Hampshire Medical Society. He was also elected chief executive of New Hampshire by an overwhelming majority. He served in 1791 and 1792 as President. Then when the new State Constitution took effect in 1792 he continued, now as governor. He resigned in 1794 after four years because of declining health; he died the next year.

During his tenure, he oversaw the installation of a new state constitution, compilation of the laws and statutes in force, and provision for the early payment of the State's debt. He actively promoted agriculture and manufacturing, the improvement of roads, and saw the start of projects to build canals.

Bartlett actively practiced medicine for 45 years. From a modern perspective, this alone would be a major accomplishment. He had no university training, and left school at the age of fourteen. In effect, he apprenticed with another doctor, and set up a practice at the age twenty. His reputation was firmly secured in 1754.

The area around Kingston had an epidemic of a fever and canker called throat distemper around 1735. For adults it was a serious illness, but for children it was frequently fatal, especially among the very young. When the illness struck again in 1754, Dr. Bartlett simply tried doses of several available drugs, and discovered that Peruvian Bark would relieve symptoms long enough to allow recovery.

Bartlett lived during a time when medical practice was progressing rapidly. His wide reading, steady hands, and conscientious work made him an effective and successful physician. He founded and was the first president of the New Hampshire Medical Society. In 1790 he delivered the commencement address at Dartmouth College when his son Ezra graduated. In part, the honor was due to his signing of the Declaration of Independence, and his new selection as President of New Hampshire. But, in part, it was a recognition of his medical career. He was awarded an honorary MD (Doctor of Medicine) the same day his son earned that degree. 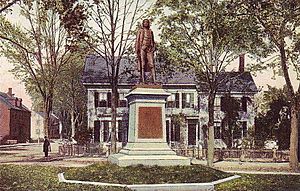 He retired to his home in Kingston, and died there on May 19, 1795. He is buried next to his wife Mary in the Plains Cemetery, also at Kingston. A bronze statue of Bartlett stands in the town square of Amesbury, Massachusetts. His portrait hangs in the State House in Concord, New Hampshire. Bartlett, New Hampshire is named in his honor, and The Josiah Bartlett elementary school is a visible presence on its major roadway.

The fictional U.S. president on The West Wing, a popular NBC television drama series, is named "Josiah Bartlet". Despite the spelling difference, the character (played by Martin Sheen), who is also a former governor and Congressman from New Hampshire, claims to be a direct descendant of a New Hampshire signer of the Declaration of Independence.

All content from Kiddle encyclopedia articles (including the article images and facts) can be freely used under Attribution-ShareAlike license, unless stated otherwise. Cite this article:
Josiah Bartlett Facts for Kids. Kiddle Encyclopedia.