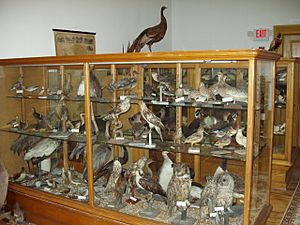 The Bartlett Museum is a nonprofit museum located at 270 Main Street, Amesbury, Massachusetts. It is named after Josiah Bartlett, who was born in Amesbury, and later signed the United States Declaration of Independence.

The building was originally the Bartlett School from 1870 until it was closed in 1968. The museum was formed in 1968 as part of the celebrations for the 300th anniversary of the founding of the Town of Amesbury. As of 2009[update] the museum's exhibits included:

The schoolhouse formerly contained the Salisbury Point Railroad Society's museum, with its collection of railroad items, however it was removed in 2006.

All content from Kiddle encyclopedia articles (including the article images and facts) can be freely used under Attribution-ShareAlike license, unless stated otherwise. Cite this article:
Bartlett Museum, Inc. Facts for Kids. Kiddle Encyclopedia.