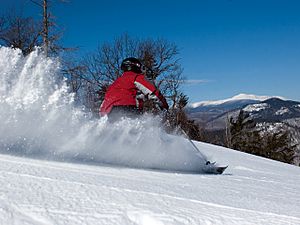 Attitash Mountain Resort is a ski area located on U.S. Route 302 in Bartlett, New Hampshire, near North Conway. Constructed in 1938 by the Works Progress Administration, As of October 2019, Attitash is operated by Vail Resorts (after being purchased from the previous owners, Peak Resorts). It operates under a special-use permit with the White Mountain National Forest. 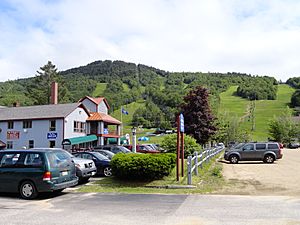 A view of the slopes of Attitash in summer

Attitash has two peaks, Attitash and Bear Peak, both of which offer a variety of terrain. Attitash consists of old New England-style trails. The more challenging terrain on this mountain are narrow trails with challenging fall lines. It also offers a learning center, featuring a Snowbelt, Learning Center chairlift and the Double Double chairlift (627 vertical feet in 11 minutes), which provides access to longer greens trails. Bear Peak was developed by the American Ski Company and features wider trails and glades. Both mountains have high-speed quads, the Flying Bear at Bear Peak taking skiers straight to the summit (1,462 vertical feet in 8 minutes), and the Flying Yankee at Attitash taking skiers halfway up the mountain (860 vertical feet in 6 minutes). The Summit Triple (1,659 vertical feet) takes about 11.5 minutes to get to the top.

In the era of Peak Resorts, snowmaking and grooming were vastly improved. Despite concerns from locals, Peak was the company that managed to finally get the resort out of Chapter 11 Bankruptcy. While the halfpipe was removed, the terrain park was arguably improved by splitting it into three separate parks and moving them all to Bear Peak, allowing the blue they originally occupied to be used for the ski school.

In the second half of the 2018/2019 season, the top half of Attitash was closed due to major problems with the Summit Triple. Despite a fairly new bull wheel (replaced just a few years earlier), it was found to also be in need of massive repair to the gear box, including a replacement "planetary gear". The triple's replacement has long been a hot topic. While hopes are the new owners (Vail Resorts) can finally replace it, for now the Summit Triple was noticeably repaired (the new planetary gear in the base station is silver, not black) and has run smoothly.

It is unknown at the time what investments by Vail Resorts, who closed the deal in October 2019, plans to make in the former Peak Resorts properties, including Attitash.

Attitash also has summer activities, including a miniature water park, an alpine slide, mountain biking, and horseback riding. Peak Resorts has brought new attractions like the year-round mountain coaster (a faster, powered version of the alpine slide), a climbing wall, four Euro bungee trampolines, a giant air bag jump, and the newest attraction, the East Coast's longest single-span zip-line. Peak Resorts improved year-round operation in hopes for high enough profit to replace the Summit Triple with a high-speed quad. So far this has not succeeded yet and it is unknown how Vail Resorts will change summer (and winter) operations at the time.

All content from Kiddle encyclopedia articles (including the article images and facts) can be freely used under Attribution-ShareAlike license, unless stated otherwise. Cite this article:
Attitash Mountain Resort Facts for Kids. Kiddle Encyclopedia.