Manchester is the largest city in the U.S. state of New Hampshire, the tenth largest city in New England, and as of 2015 the largest city in northern New England, an area comprising the states of Maine, New Hampshire, and Vermont. It is located in Hillsborough County along the banks of the Merrimack River, which divides the city into eastern and western sections. Manchester is near the northern end of the Northeast megalopolis. It was first named by the merchant and inventor Samuel Blodget (after whom the Samuel Blodget Park in Manchester North is named). Blodget's vision was to create a great industrial center similar to that of the original Manchester in England, which was the world's first industrialized city.

Manchester often appears favorably in lists ranking the affordability and livability of American cities. In 2009, CNNMoney.com rated Manchester 13th in a list of the 100 best cities in which to live and launch a business in the United States. In addition, Kiplinger voted Manchester the second most tax-friendly city in the United States, second only to Anchorage, Alaska. Also in 2009, Forbes magazine ranked the Manchester region first on its list of "America's 100 Cheapest Places to Live." According to the Equality of Opportunity Project, released in 2013, Manchester ranked as the seventh best metropolitan area in terms of upward income mobility in the United States. 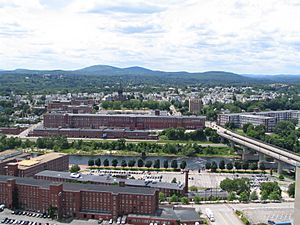 Mills on the Merrimack River and the West Side of Manchester

Pennacook Indians called it Namaoskeag, meaning "good fishing place"—a reference to the Amoskeag Falls in the Merrimack River. In 1722, John Goffe III settled beside Cohas Brook, later building a dam and sawmill at what was dubbed Old Harry's Town. It was granted by Massachusetts in 1727 as Tyngstown to veterans of Queen Anne's War who served in 1703 under Captain William Tyng. But at New Hampshire's 1741 separation from Massachusetts, the grant was ruled invalid and substituted with Wilton, Maine, so Governor Benning Wentworth rechartered the town in 1751 as Derryfield. Derryfield remains a neighborhood in contemporary Manchester, along its easternmost area adjacent to Massabesic Lake.

In 1807, Samuel Blodget opened a canal and lock system to allow vessels passage around the falls. He envisioned here a great industrial center, "the Manchester of America", like the Industrial Revolution's Manchester in England, the first industrialized city in the world. In 1809, Benjamin Prichard and others built a cotton spinning mill operated by water power on the western bank of the Merrimack. Following Blodgett's suggestion, Derryfield was renamed Manchester in 1810, the year the mill was incorporated as the Amoskeag Cotton & Woolen Manufacturing Company. It would be purchased in 1825 by entrepreneurs from Massachusetts, expanded to 3 mills in 1826, and then incorporated in 1831 as the Amoskeag Manufacturing Company. 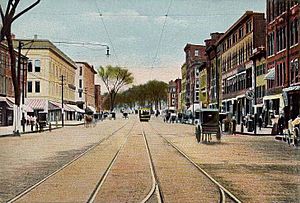 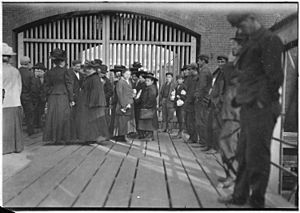 On the eastern bank, Amoskeag engineers and architects planned a model company town, founded in 1838 with Elm Street as its main thoroughfare. Incorporated as a city in 1846, Manchester would become home to the largest cotton mill in the world—Mill No. 11, stretching 900 feet (270 m) long by 103 feet (31 m) wide, and containing 4,000 looms. Other products made in the community included shoes, cigars, and paper. The Amoskeag foundry made rifles, sewing machines, textile machinery, fire engines, and locomotives in a division called the Amoskeag Locomotive Works (later, the Manchester Locomotive Works). The rapid growth of the mills demanded a large influx of workers, resulting in a flood of immigrants, particularly French Canadians. Many current residents descend from these workers. The Amoskeag Manufacturing Company went out of business in 1935, although its red brick mills have been renovated for other uses. Indeed, the mill town's 19th-century affluence left behind some of the finest Victorian commercial, municipal, and residential architecture in the state. 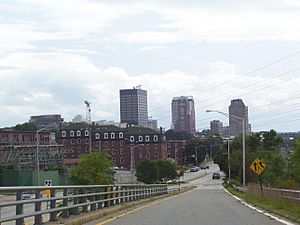 View of downtown from the north

According to the United States Census Bureau, the city has a total area of 35.0 square miles (90.6 km2), of which 33.1 square miles (85.7 km2) is land and 1.9 square miles (4.8 km2) is water, comprising 5.33% of the city. Manchester is drained by the Merrimack River, the Piscataquog River and Cohas Brook. Massabesic Lake is on the eastern border. The highest point in Manchester is atop Wellington Hill, where the elevation reaches 570 feet (170 m) above sea level.

The Manchester Planning Board, in its 2010 Master Plan, defines 25 neighborhoods within the city. LivableMHT has drawn maps of the neighborhoods and neighborhood village centers as defined by the city. Recognition of particular neighborhoods varies, with some having neighborhood associations, but none have any legal or political authority.

The major neighborhoods, historically, include Amoskeag, Rimmon Heights, Notre Dame/McGregorville and Piscataquog/Granite Square also known as "Piscat" on the West Side; and the North End, Janeville/Corey Square, Hallsville and Bakersville on the East Side; along with Youngsville and Goffes Falls on the periphery of the city.

In 2007, the city began a Neighborhood Initiatives program to "insure that our neighborhoods are vibrant, livable areas since these are the portions of the city where most of the residents spend their time living, playing, shopping and going to school." The purpose of this initiative is to foster vibrancy and redevelopment in the neighborhoods, and to restore the sense of neighborhood communities that had been overlooked in the city for some time. The city began the program with street-scape and infrastructure improvements in the Rimmon Heights neighborhood of the West Side, which has spurred growth and investment in and by the community. Despite the success of the program in Rimmon Heights, it was unclear in recent years how the city planned to implement similar programs throughout the city. The city announced plans for extending the Neighborhood Initiatives program to the Hollow neighborhood in February 2012.

View of the West Side from Rock Rimmon

The urban core of Manchester extends beyond its city limits in several directions, particularly west and south of downtown, including:

Manchester has a four-season humid continental climate (Köppen Dfa), with long, cold, snowy winters, and very warm and somewhat humid summers; spring and fall in between are crisp and relatively brief transitions. The monthly daily average temperature ranges from 24.4 °F (−4.2 °C) in January to 72.5 °F (22.5 °C) in July. On average, there are 11 days of 90 °F (32 °C)+ highs and 2.9 days of sub-0 °F (−18 °C) lows. Precipitation is well-spread throughout the year, though winter is the driest while March tends to be the wettest. Snowfall, the heaviest of which is typically delivered through nor'easters, averages around 47 inches (119 cm) per season, but varies widely from year to year. 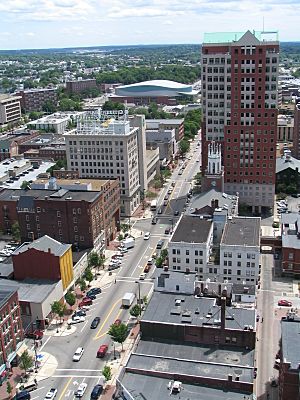 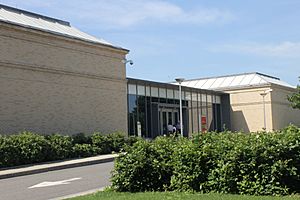 Cultural landmarks include the historic Palace Theatre, the Currier Museum of Art, the New Hampshire Institute of Art, the Franco-American Center, the Manchester Historic Association Millyard Museum, the Massabesic Audubon Center, the Amoskeag Fishways Learning and Visitors Center, the Lawrence L. Lee Scouting Museum and Max I. Silber Library, and the SEE Science Center. Valley Cemetery, the resting place of numerous prominent citizens since 1841, is an early example of a garden-style burial ground.

The John F. Kennedy Memorial Coliseum is another, smaller venue located in downtown Manchester with a capacity of approximately 3,000 seats. It was completed in 1963, serves as home ice for the Manchester Central and Memorial High School hockey teams, and is home to the Southern New Hampshire Skating Club.

The nickname "ManchVegas" was derived from illegal gambling in local businesses during the late 1980s or early 1990s. Many pizza shops and local bars had video poker machines that would pay out real money. The nickname was coined following a citywide bust of these machines. It was then adopted as a lampoon of the city's limited entertainment opportunities. The term has since become a source of pride as the city's entertainment scene has grown. By 2003 it was well enough known that a note on Virtualtourist.com said, "Residents reflect the regional dry humor by referring to sedate Manchester as 'ManchVegas'." By 2005, an article in Manchester's Hippo (a local alternative weekly) said that then-Mayor Robert A. Baines "is pushing to replace the nickname ManchVegas with Manchhattan" (meaning Manchester+Manhattan).

Manchester has a growing collective of artists, due in large part to the influx of young students at the New Hampshire Institute of Art, Southern New Hampshire University, and the University of New Hampshire at Manchester. Slam Free or Die, New Hampshire's only weekly slam poetry venue, is located in Manchester and was voted "Best Poetry Venue in the World" by readers of Write Bloody Publishing.

All content from Kiddle encyclopedia articles (including the article images and facts) can be freely used under Attribution-ShareAlike license, unless stated otherwise. Cite this article:
Manchester, New Hampshire Facts for Kids. Kiddle Encyclopedia.