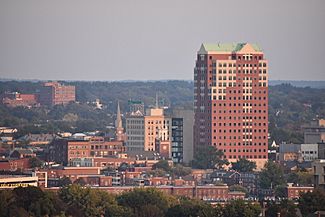 The building is recognizable as one of the main features of the Manchester skyline, along with the Brady Sullivan Plaza, SNHU Arena, the DoubleTree Hotel, the Center of New Hampshire, and the Citizens Bank building. The facade is brick and limestone, with a four-gabled blue roof. The building was built in the early 1990s (construction was completed in 1992) by Nynex Properties at a cost of $22 million. Ownership of the building changed hands several times until it was purchased by its present owner, Brady Sullivan Properties (also the owner of the nearby Brady Sullivan Plaza, New Hampshire's second-tallest building) in September 2014.

All content from Kiddle encyclopedia articles (including the article images and facts) can be freely used under Attribution-ShareAlike license, unless stated otherwise. Cite this article:
City Hall Plaza (Manchester) Facts for Kids. Kiddle Encyclopedia.