The Amoskeag Falls are a set of waterfalls located in Manchester, New Hampshire on the Merrimack River. 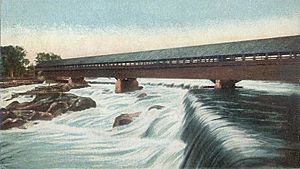 "Amoskeag" derives from the Pennacook word "Namoskeag," which roughly translates as "good fishing place.” Here, the Merrimack River drops 50 feet (15 m). Native American tribes in the region visited Amoskeag Falls due to its plentiful migrating sturgeon, alewife, and salmon, which were easily fished in the rapids. Natives typically caught fish using a combination of large nets strung across the river. Significant native settlements were sited near the falls, particularly on the high bluffs overlooking the east side of the river.

In 1807, Samuel Blodgett started a canal and lock system at the river to help vessels navigate around the falls, opening the area to development. This soon led to the use of the falls for a power canal to provide water power for Manchester's 19th century industrial development, most notable for the Amoskeag Manufacturing Company.

Use of the name

Due to the significance of the falls in Manchester history, a number of local companies have adopted their name. Examples include the Amoskeag Manufacturing Company (which operated a majority of Manchester's textile mills using power from the falls until they closed in the midst of labor strikes in 1935), its division called the Amoskeag Locomotive Works (an early manufacturer of fire trucks and train cars), and the Amoskeag Fishways (an environmental education center located at the Amoskeag Falls).

All content from Kiddle encyclopedia articles (including the article images and facts) can be freely used under Attribution-ShareAlike license, unless stated otherwise. Cite this article:
Amoskeag Falls Facts for Kids. Kiddle Encyclopedia.