Nashua is a city in Hillsborough County, New Hampshire, United States. As of the 2010 census, Nashua had a total population of 86,494, making it the second largest city in the state (and in the three northern New England states) after Manchester.

Built around the now-departed textile industry, in recent decades it has been swept up in southern New Hampshire's economic expansion as part of the Boston region. Nashua was twice named "Best Place to Live in America" in annual surveys by Money magazine. It is the only city to get the No. 1 ranking on two occasions—in 1987 and 1998. 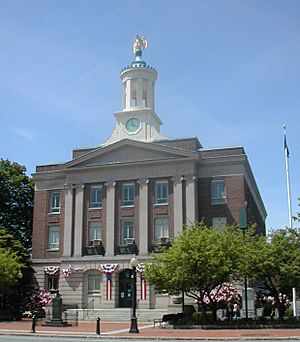 The area was part of a 200-square-mile (520 km2) tract of land in Massachusetts called Dunstable, which had been awarded to Edward Tyng of Dunstable, England. Nashua lies approximately in the center of the original 1673 grant. The previously disputed boundary between Massachusetts and New Hampshire was fixed in 1741 when the governorships of the two provinces were separated. As a consequence, the township of Dunstable was divided in two. Tyngsborough and some of Dunstable remained in Massachusetts, while Dunstable, New Hampshire, was incorporated in 1746 from the northern section of the town.

Located at the confluence of the Nashua and Merrimack rivers, Dunstable was first settled about 1654 as a fur trading town. Like many 19th century riverfront New England communities, it would be developed during the Industrial Revolution with textile mills operated from water power. By 1836, the Nashua Manufacturing Company had built three cotton mills which produced 9.3 million yards of cloth annually on 710 looms. On December 31, 1836, the New Hampshire half of Dunstable was renamed Nashua, after the Nashua River, by a declaration of the New Hampshire legislature (the Dunstable name lives on across the Massachusetts border). The Nashua River was named by the Nashuway Indians, and in the Penacook language it means "beautiful stream with a pebbly bottom", with an alternative meaning of "land between two rivers". In 1842 the town split again in two for eleven years following a dispute between the area north of the Nashua, and the area south of the river. During that time the northern area (today "French Hill") called itself "Nashville", while the southern part kept the name Nashua. They reconciled in 1853 and joined together to charter the "city of Nashua". Six railroad lines crossed the mill town, namely the Boston, Lowell and Nashua; Worcester and Nashua; Nashua and Acton; Nashua and Wilton; Concord and Nashua; and Rochester railroads; with 56 trains entering and departing daily in the years before the Civil War. These various railroads led to all sections of the country, north, east, south, and west. The Jackson Manufacturing Company employed hundreds of workers in the 1870s.

Like the rival Amoskeag Manufacturing Company upriver in Manchester, the Nashua mills prospered until about World War I, after which a slow decline set in. Water power was replaced with newer forms of energy to run factories. Cotton could be manufactured into fabric where it grew, saving transportation costs. The textile business started moving to the South during the Great Depression, with the last mill closing in 1949. Many citizens were left unemployed. But then Sanders Associates, a newly created defense firm that is now part of BAE Systems, moved into one of the closed mills and launched the city's rebirth. Besides being credited with reviving the city's flagging economy, Sanders Associates also played a key role in the development of the home video game console market. Ralph H. Baer, an employee of Sanders, developed what would become the Magnavox Odyssey, the first commercial home video game system. Sam Tamposi is credited with much of the city's revival. The arrival of Digital Equipment Corp. (now part of Hewlett-Packard) in the 1970s made the city part of the Boston-area high-tech corridor. 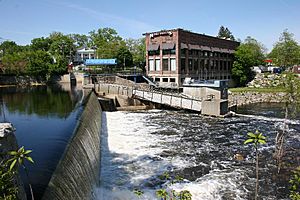 According to the United States Census Bureau, the city has a total area of 31.9 square miles (82.6 km2), of which 30.8 square miles (79.9 km2) is land and 1.0 square mile (2.7 km2) is water, comprising 3.25% of the city. The eastern boundary of Nashua is formed by the Merrimack River, and the city is drained by the Nashua River and Salmon Brook, tributaries of the Merrimack. The Nashua River roughly bisects the city. Pennichuck Brook forms the northern boundary of the city. The highest point in Nashua is Gilboa Hill in the southern part of the city, at 426 feet (130 m) above sea level.

The city is bordered on the east by the Merrimack River, across which lies the town of Hudson, New Hampshire.

Nashua has a four-season humid continental climate (Köppen Dfb), with long, cold, snowy winters, and very warm and somewhat humid summers; spring and autumn in between are relatively brief transitions. The monthly daily average temperature ranges from 22.7 °F (−5.2 °C) in January to 70.9 °F (21.6 °C) in July. On average, there are 9.4 days of 90 °F (32 °C)+ highs and 8.7 days of sub-0 °F (−18 °C) lows. Precipitation is well-spread throughout the year, though winter is the driest. Snowfall, the heaviest of which is typically delivered through nor'easters, averages around 55 inches (140 cm) per season, but can vary widely from year to year. 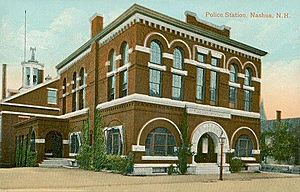 There were 35,044 households out of which 28.7% had children under the age of 18 living with them, 45.9% were married couples living together, 11.6% had a female householder with no husband present, and 37.6% were non-families. 29.4% of all households were made up of individuals and 9.6% had someone living alone who was 65 years of age or older. The average household size was 2.42 and the average family size was 3.01.

Nashua Fire has 176 full-time members and is responsible for 31.9 square miles (83 km2), protecting a population of 87,259. In the city, there are six stations. There is one fire chief, one assistant chief, and four deputy chiefs. The department has six engines, two ladder trucks, two spare engines, one spare ladder, two hazmat trucks, and two forestry trucks. Nashua uses private ambulance AMR (American Regional Ambulance). The department has 5 fire commissioners. The commission has overall responsibility for the policy decisions, promotions, discipline, hiring and terminations. The fire chief reports directly to the commission. Their responsibility is to also work with Fire Administration with planning and prioritizing the department budget. 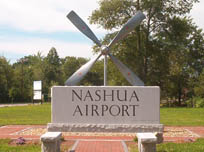 The Everett Turnpike is the major highway running through the city. U.S. Route 3 follows the turnpike from the Massachusetts border north to Exit 7E, where it branches to the northeast along the two-lane Henri A. Burque Highway to Concord Street and then heads north into the town of Merrimack. Other New Hampshire state highways in the city include:

Maps of the Nashua area often show a stretch of freeway forming a circumferential highway through Nashua and the neighboring town of Hudson. Only a small section of the south end of this highway (Exit 2 off U.S. Route 3) has been built, and it is unclear whether the highway will ever be completed. If finished, the Nashua-Hudson Circumferential Highway would be part of the Everett Turnpike, and would rejoin the mainline highway at a hypothetical Exit 9 in northern Nashua.

Public transportation is provided by the Nashua Transit System, which has nine scheduled bus routes in the city. Boston Express, a subsidiary of Concord Trailways, operates a Nashua-Boston bus line that runs out of the Nashua Transit Center off Exit 8 on the Everett Turnpike. This line transports passengers to South Station and Logan International Airport in Boston.

Nashua Airport (Boire Field), a general aviation facility, is in the city's northwest corner. The nearest airports with scheduled airline service are Manchester–Boston Regional Airport in Manchester and Logan International Airport in Boston.

Efforts are being made to extend the Massachusetts Bay Transportation Authority's commuter rail Lowell Line from Lowell to Nashua. The state legislature created the New Hampshire Rail Transit Authority (NHRTA) in 2007 with the goal of overseeing the development of commuter rail in the state. Currently, proposed commuter rail stops include Nashua, Manchester, and Concord.

A few episodes of the US television show The Office were set in a fictional Nashua branch of Dunder Mifflin as Michael Scott's love interest and future wife, Holly Flax, is from Nashua. The character Pam Beesley said the Nashua branch "is only accessible though cross country skiing".

An episode of MTV's MADE was filmed in 2004 at Nashua High School North.

In an episode of the second season of The West Wing, "In the Shadow of Two Gunmen, Part II", during a flashback Josh Lyman visits a town hall meeting in Nashua to see a candidate he could support. The candidate turns out to be Josiah Bartlet, the next President of the United States.

In Good Will Hunting, Matt Damon's character Will Hunting says, "I wanna move up to Nashua, get a nice little spread, get some sheep and tend to them," to Robin Williams' character Sean.

All content from Kiddle encyclopedia articles (including the article images and facts) can be freely used under Attribution-ShareAlike license, unless stated otherwise. Cite this article:
Nashua, New Hampshire Facts for Kids. Kiddle Encyclopedia.