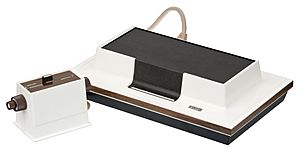 The Magnavox Odyssey is a home video game console made by Magnavox in 1972. It is the first video game console ever made. It is part of the Magnavox Odyssey series. The console could only display three square dots on the screen, and they could be moved with two controllers. To get a different game, you had to put a sheet of plastic on the TV screen and insert a card into the console that matches the number. It has no on/off switch. The games start automatically if the console is powered.

All content from Kiddle encyclopedia articles (including the article images and facts) can be freely used under Attribution-ShareAlike license, unless stated otherwise. Cite this article:
Magnavox Odyssey Facts for Kids. Kiddle Encyclopedia.