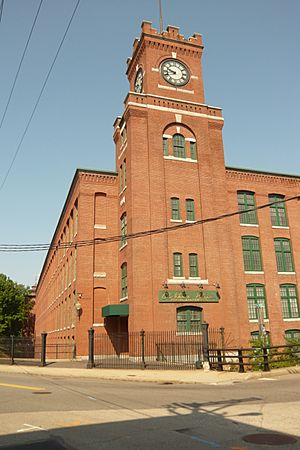 The Nashua Manufacturing Company Historic District in Nashua, New Hampshire, is a historic district that was listed on the National Register of Historic Places (NRHP) in 1987. It encompasses an area just west of downtown Nashua, roughly located along the southern bank of the Nashua River, bordered on the west side by Mine Falls Park, on the south side by the Nashua River canal, up to Ledge Street, and from the east side by Factory, Pine and Water streets, up to the Main Street bridge.

Today this area is dominated by the clock tower at "Clock Tower Place" apartments, and the large "Millyard" smokestack of the Picker building. The district takes its name from the time when this complex of buildings belonged to the Nashua Manufacturing Company, and though surrounding buildings also served the company in some way or another, they are not included in the district. The Nashua Manufacturing Company was originally built as a cotton mill and was incorporated in 1823. Their competitor, the Jackson Manufacturing Company, located downstream on the other side of the Main Street bridge at Jackson Falls dam, was incorporated in 1824.

Though all of Mine Falls Park is not a part of the district, the entirety of the Nashua River Canal is, up to and including the 1886 Mine Falls Gatehouse. This "Upper", or "Power canal" is 3 miles (5 km) long, 6 feet (1.8 m) deep and 60 feet (18 m) wide, and it was dug and in operation by 1830. It contributed significantly to the economic prosperity of the company.

In 1835 the town was the third largest city of New Hampshire after Dover and Portsmouth, and the Nashua Manufacturing Company opened their own bank, called the Nashua Bank. The creation of a new railroad line to Nashua from Lowell, Massachusetts, in 1838 gave the local economy a further boost, and the Nashua Iron Company opened, specializing in locomotive parts for this growing new industry. The Nashua Manufacturing Company built 48 houses or tenements and two churches to be able to hire enough workers to man the machinery in its complex.

Non-contributing elements within the designated area

All content from Kiddle encyclopedia articles (including the article images and facts) can be freely used under Attribution-ShareAlike license, unless stated otherwise. Cite this article:
Nashua Manufacturing Company Historic District Facts for Kids. Kiddle Encyclopedia.