Farmington is a town in Strafford County, New Hampshire, United States. The population was 6,722 at the 2020 census. Farmington is home to Blue Job State Forest, the Tebbetts Hill Reservation, and Baxter Lake.

The town center, where 3,824 people resided at the 2020 census, is defined by the U.S. Census Bureau as the Farmington census-designated place and is located at the junction of New Hampshire routes 75 and 153.

Abenaki Indians once used the Cochecho River for transportation, and had a camping ground on Meetinghouse Hill, where they built birch bark canoes. Otherwise, the river valley was wilderness, through which Indians from the north traveled after crossing Lake Winnipesaukee on their way to raid settlements in and around Dover. To stop the raids, in 1721 the Colonial Assembly in Portsmouth approved construction of a fort at the foot of the lake, with a soldiers' road built from Dover to supply it. In 1722, Bay Road was surveyed and completed. Along its course the town of Farmington would grow.

The settlement began as the Northwest Parish of Rochester, which was chartered in 1722. The last Indian attack in the general region occurred in 1748, but by 1749, Native Americans had disappeared from warfare and disease. Farmers cultivated the rocky soil, and gristmills used water power of streams to grind their grain. Sawmills cut the abundant timber, and the first frame house at the village was built in 1782. In 1790, Jonas March from Portsmouth established a store, behind which teamsters unloaded on his dock the lumber he traded. The area became known as March's Dock, Farmington Dock, and finally just The Dock.

Inhabitants of the Northwest Parish were taxed to support both the meetinghouse and minister on Rochester Hill about twelve miles away, a distance which made attendance difficult. A movement began in the 1770s to establish a separate township, and in 1783 a petition for charter was submitted to the state legislature. It was denied, but another petition in 1798 was granted. With about 1,000 inhabitants, Farmington was incorporated. In 1800, a 40 by 50 foot, two story meetinghouse was erected on Meetinghouse Hill. The same year, John Wingate established a blacksmithy. He would also become proprietor of Wingate's Tavern.

In the 19th century, the community developed a prime shoemaking industry, and was one of the first places to use automated machines instead of handwork. In 1836, shoe manufacturing began at a shop on Spring Street built by E. H. Badger, although it was soon abandoned to creditors. Martin Luther Hayes took over the business, and by 1840 was successful enough to enlarge the building. The town would be connected by railroad to Dover in 1849, the line extended to Alton Bay in 1851. Shoes were shipped to Boston to be sold at semi-annual auctions for 50 cents a pair.

Following the Civil War, the shoe business boomed and numerous factories were built. Despite a fire in 1875 which destroyed much of the center of town, Farmington was known as "The Shoe Capital of New Hampshire." Other factories produced knives, knit underwear, wooden boxes, wooden handles and carriages. Brushes were manufactured by the F. W. Browne Company, from which Booker T. Washington ordered twelve street brooms in 1915 for use at the Tuskegee Institute. The town had five blacksmith shops. But the Panic of 1893 closed all but two large shoe factories. The industry faded in the 20th century, when most of the factories were demolished.

Farmington is drained by the Ela River, Mad River and Cochecho River. Part of the Blue Hills Range, foothills of the White Mountains, is in the southwest. The highest point in Farmington is Blue Job Mountain, at 1,350 feet (410 m) above sea level. Farmington lies almost fully within the Piscataqua River (Coastal) watershed, with the westernmost corner of town located in the Merrimack River watershed. 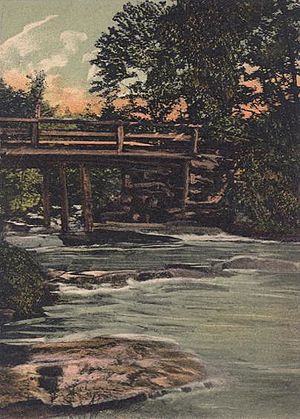 Although the town has about the same percentage of population below the poverty line as does the county, the town has a disproportionate share of the county's low-income residents living just above the poverty line, and a disproportionately small share of the county's affluent households. This means that with changing socio-economic pressures, a larger portion of the town's population is at risk of falling into poverty than is the case elsewhere in the county. 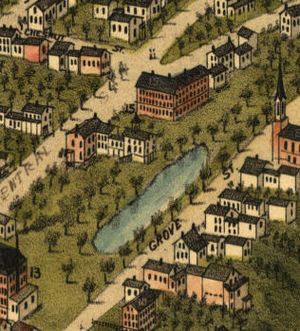 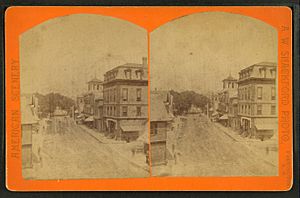 All content from Kiddle encyclopedia articles (including the article images and facts) can be freely used under Attribution-ShareAlike license, unless stated otherwise. Cite this article:
Farmington, New Hampshire Facts for Kids. Kiddle Encyclopedia.