Barnstead is a town in Belknap County, New Hampshire, United States. The population was 4,915 at the 2020 census, up from 4,593 at the 2010 census. Home to the Suncook Lakes, Barnstead includes the villages of Center Barnstead, Barnstead Parade (identified as "Barnstead" on topographic maps) and South Barnstead.

The town was granted by Governor William Dummer on 20 May 1727 to the Reverend Joseph Adams and others. Settlement commenced in 1767, the year Barnstead was incorporated as a town by Governor John Wentworth. Many of the settlers came from Barnstable, Massachusetts, and Hempstead, New York - the name is taken from these two.

Although not mountainous, the terrain forms large swells, good for grazing. By 1830, when the population was 2,047, the town contained about 2,500 sheep. Farmers found the soil easy to cultivate and productive. The Suncook River and its tributaries provided water power for mills. By 1859, industries included a woolen cloth factory, seven sawmills, four shingle mills, four clapboard mills, one grooving machine, one turning machine, and two tanneries. Barnstead manufactured large amounts of lumber, which it supplied to neighboring towns.

Barnstead was served in 1874 by the Concord and Rochester Railroad, and an extension of the Suncook Valley Railroad was being planned. 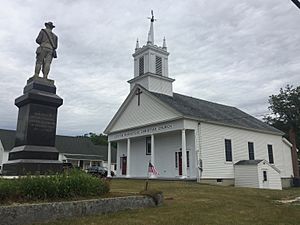 There were 1,422 households, out of which 34.9% had children under the age of 18 living with them, 66.2% were married couples living together, 6.3% had a female householder with no husband present, and 22.9% were non-families. 17.0% of all households were made up of individuals, and 5.3% had someone living alone who was 65 years of age or older. The average household size was 2.73 and the average family size was 3.08.

All content from Kiddle encyclopedia articles (including the article images and facts) can be freely used under Attribution-ShareAlike license, unless stated otherwise. Cite this article:
Barnstead, New Hampshire Facts for Kids. Kiddle Encyclopedia.