Kids Encyclopedia Facts
This page is about the town in New Hampshire. For other areas of the same name, see Barrington.

Barrington is a town in Strafford County, New Hampshire, United States. The population was 9,326 at the 2020 census, up from 8,576 at the 2010 census. The town is a woodland, farm and commuter town.

Barrington was incorporated in 1722 and named for Samuel Shute of Barrington Hall, colonial governor of Massachusetts and New Hampshire. His brother was John Shute Barrington, 1st Viscount Barrington.

The town was made up of two grants, the first containing all of Strafford and present-day Barrington except for a parcel two miles wide called New Portsmouth, or the Two Mile Streak. This second grant had been set aside to provide fuel and home sites for imported workers at the Lamprey River Iron Works, chartered in 1719 by the Massachusetts General Court to encourage industrial development in the province.

Slow at first to be settled because of rocky soil, Barrington by 1810 had 3,564 residents, then the state's third largest town, its primary industry the smelting of iron ore. The Isinglass River, together with its tributaries, provided water power for grist, fulling and saw mills. In 1820, Strafford was set off from Barrington, reducing its land area by about half, because of lengthy travel required to attend town meetings.

"Of those towns in the state whose scenery is somewhat quiet, one of the most beautiful is Barrington."

Indeed, the town's attractive natural features, including rivers, brooks, waterfalls and not less than 14 ponds, are summarized by the name of a 374-foot (114 meter) summit: Beauty Hill. Barrington is bisected by the Calef Highway (Route 125), named for a state senator from the 1800s whose family also founded the locally famous general store founded in 1869.

According to the United States Census Bureau, the town has a total area of 48.5 square miles (126 km2), of which 46.6 sq mi (121 km2) of it is land and 1.9 sq mi (4.9 km2) is water, comprising 3.98% of the town. Barrington is drained by the Isinglass River and Bellamy River. Swains Lake and Mendum's Pond are in the south. The highest point in town is an unnamed summit near its western border, measuring 610 feet (190 m) above sea level. The highest named summit is Bumfagging Hill, at 601 ft (183 m). Barrington lies fully within the Piscataqua River (Coastal) watershed.

The commercial center of town is the village of East Barrington, centered on the junction of state routes 9 and 125. 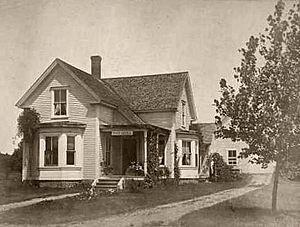 There were 2,756 households, out of which 38.8% had children under the age of 18 living with them, 64.6% were married couples living together, 6.5% had a female householder with no husband present, and 24.7% were non-families. 16.9% of all households were made up of individuals, and 4.3% had someone living alone who was 65 years of age or older. The average household size was 2.71 and the average family size was 3.07. 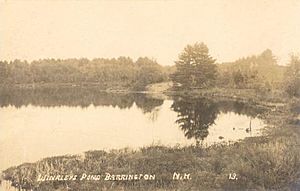 All content from Kiddle encyclopedia articles (including the article images and facts) can be freely used under Attribution-ShareAlike license, unless stated otherwise. Cite this article:
Barrington, New Hampshire Facts for Kids. Kiddle Encyclopedia.