Madbury is a town in Strafford County, New Hampshire, United States. The population was 1,918 at the 2020 census.

Madbury was originally a part of Dover called Barbadoes, after the West Indies island of Barbados with which settlers conducted trade, sending wood and lumber in exchange for sugar, molasses and other commodities. The name survives at Barbadoes Pond. Garrison houses were built as protection against the Indians. Later it was part of Durham, a Dover parish which organized in 1716 and then incorporated in 1735. Madbury was once the farm of Sir Francis Champernowne of Greenland, and named after his ancient family's mansion at Modbury in Devon, England.

The name Madbury Parish was first recorded in a 1755 grant made by Colonial Governor Benning Wentworth, with full town privileges granted in 1768 by his successor, Governor John Wentworth. A lumbering and farming community, Madbury was incorporated in 1775. Jackson in Carroll County was first settled in 1778 as New Madbury by residents of the town. Today, Madbury is residential, its inhabitants generally employed elsewhere. Numerous faculty of the nearby University of New Hampshire reside here.

The town of Madbury is shaped like a wedge, extending from the eastern tip of the town touching Cedar Point on Little Bay to the town's border with Barrington to the west. The towns of Durham and Lee border Madbury to the south, and the city of Dover is to the northeast. According to the United States Census Bureau, the town has a total area of 12.2 square miles (32 km2), of which 11.7 sq mi (30 km2) is land and 0.6 sq mi (1.6 km2) is water, comprising 4.58% of the town. The highest point of land is the summit of Hicks Hill, at 331 feet (101 m) above sea level, located close to the center of town.

Although a branch of the Oyster River rises in western Madbury, the Bellamy River is the only river of size in town. Bellamy Reservoir, fed by the Bellamy River together with Mallego Brook, covers 382 acres (1.5 km2) and provides 60% of the water supply for Portsmouth. It was created in 1960 with a dam built by the Army Corps of Engineers. 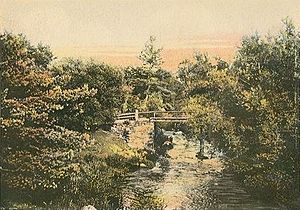 There were 534 households, out of which 42.3% had children under the age of 18 living with them, 63.1% were married couples living together, 9.6% had a female householder with no husband present, and 23.0% were non-families. 15.0% of all households were made up of individuals, and 5.2% had someone living alone who was 65 years of age or older. The average household size was 2.83 and the average family size was 3.13. 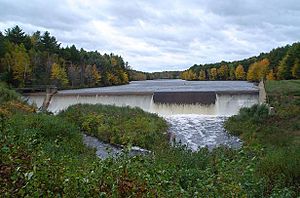 Dam at the Bellamy Reservoir

Madbury Day occurs the second Saturday in June. Main activities include the parade, community yard sale, Fire Department chicken BBQ, face-painting, and the guy who makes brooms. The parade begins at 10am at the intersection of Cherry Lane and Town Hall Rd, making its way towards the Town Hall. Participants of the parade typically include antique cars, fire engines, the Oyster River Middle School Jazz Band, clowns on unicycles, women of the Madbury Community Club, and adolescents on bicycles.

All content from Kiddle encyclopedia articles (including the article images and facts) can be freely used under Attribution-ShareAlike license, unless stated otherwise. Cite this article:
Madbury, New Hampshire Facts for Kids. Kiddle Encyclopedia.