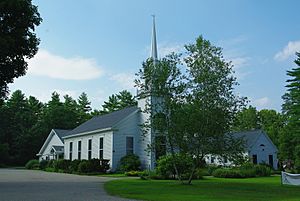 Lee is a town in Strafford County, New Hampshire, United States. The population was 4,330 at the 2010 census. The town is a rural farm and bedroom community, being close to the University of New Hampshire.

Settled in 1657, Lee was originally part of the extensive early Dover township. It includes Wheelwright Pond, named for the Reverend John Wheelwright, the founder of Exeter.

Wheelwright Pond was the site of a noted early battle during King William's War. Indians, incited by the government of New France, attacked Exeter on July 4, 1690. They were pursued by two infantry companies raised for the purpose, who overtook them at Wheelwright Pond on July 6, 1690. Fierce fighting on that day would leave 3 officers and 15 soldiers dead, together with a large number of Indians. Among the dead were Captain Noah Wiswall, Lieutenant Gershom Flagg, and Ensign Edward Walker of the Massachusetts Bay Colony.

In 1735, Durham, which included Lee, separated from Dover. Then Lee, in turn, would separate from Durham on January 16, 1766 when it was established by Colonial Governor Benning Wentworth. It was among the last of 129 towns to receive a charter during his administration, and named for British General Charles Lee, who later joined the American Revolution.

Lee is hometown for numerous faculty of the University of New Hampshire in Durham. In 2007 the U.S. Postal Service assigned the town its own ZIP code – 03861.

There were 1,466 households out of which 45.2% had children under the age of 18 living with them, 61.4% were married couples living together, 8.6% had a female householder with no husband present, and 25.5% were non-families. 17.7% of all households were made up of individuals and 4.4% had someone living alone who was 65 years of age or older. The average household size was 2.81 and the average family size was 3.20.

All content from Kiddle encyclopedia articles (including the article images and facts) can be freely used under Attribution-ShareAlike license, unless stated otherwise. Cite this article:
Lee, New Hampshire Facts for Kids. Kiddle Encyclopedia.