Newmarket is a town in Rockingham County, New Hampshire, United States. The population was 8,936 at the 2010 census. Some residents are students and employees at the nearby University of New Hampshire in Durham.

The primary settlement in town, where 5,297 people resided at the 2010 census, is defined as the Newmarket census-designated place, or CDP, and is located at the junction of New Hampshire routes 108 and 152, along the Lamprey River.

Incorporated in 1727, Newmarket is one of six towns granted by Massachusetts in the last year of the reign of King George I. It started as a parish of Exeter, and was granted full town privileges by the legislature in 1737. It was probably named for Newmarket in Suffolk, England. The Lamprey River, running through the town, was named for John Lamprey, an early settler. For a while, the town was called Lampreyville. Newmarket was a center of the New England shipping trade with the West Indies, including importation of sugar and African slaves.

Beginning with the first cotton textile mill in 1823, the Newmarket Manufacturing Company dominated the mill town's waterfront and economy with seven textile mills harnessing water power at the falls. The company had cotton shipped up from the Deep South, so its production was adversely affected by the American Civil War. It built numerous support structures, including multi-family housing for workers. The company built dams upriver to create Pawtuckaway Pond in Nottingham and Mendums Pond in Barrington—during drought, the company could release a regulated flow of water from the dams into the Lamprey to run the works. The company closed in 1929.

Adapted for modern commercial and residential uses, the textile mills are today listed on the National Register of Historic Places. In the 1970s, the mill served as the headquarters of the Timberland Company, during the years when it grew from a small work-boot manufacturer to a leading "urban" fashion brand. (The corporate headquarters are now located in nearby Stratham.)

Once a part of Newmarket, Newfields incorporated as a separate town in 1849. 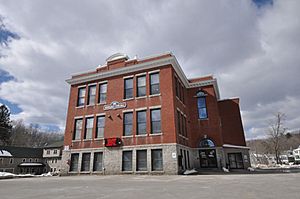 The town of Newmarket has a small, but growing and significant, Laotian and Laotian American population, refugees and their families. Buddhist practitioners among the Laotians attend the Wat Lao Mixarayam Temple in Lowell, Massachusetts. 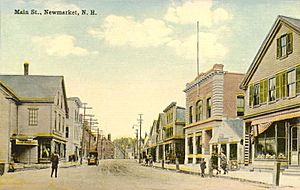 Newmarket Fire and Rescue is a combination full-time/volunteer department providing fire and emergency medical services within the town Newmarket Fire and Rescue also provides the neighboring town of Newfields with an ambulance transport service. The department consists of 45 volunteers and two full-time staff. In 2017, staff were awarded a Unit Citation by the New Hampshire Division of Fire Standards and Training and Emergency Medical Services for heroic actions undertaken at a car accident in 2017.

All content from Kiddle encyclopedia articles (including the article images and facts) can be freely used under Attribution-ShareAlike license, unless stated otherwise. Cite this article:
Newmarket, New Hampshire Facts for Kids. Kiddle Encyclopedia.