Stratham is a town in Rockingham County, New Hampshire, United States. The town had a population of 7,255 at the 2010 census, and an estimated population of 7,280 in 2013. It is bounded on the west by the Squamscott River. The town is the home of the only U.S. Lindt & Sprüngli factory and the headquarters of the Timberland Corporation. 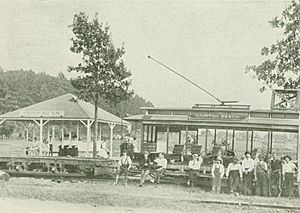 Stratham was settled in 1631 and incorporated in 1716. The area, called Winnicutt by the Pennacook Indians, was known as Squamscott Patent or Point of Rocks because of its location between Great Bay and the Squamscott River. The sixth town in the colony to be incorporated, the town was named for Wriothesley Russell, Baron Howland of Streatham, a friend of New Hampshire Royal Governor Samuel Shute.

The town is unusual among New England settlements of its size in having been comprehensively mapped in 1793 by Phinehas Merrill. It is therefore possible to identify how many of the extant buildings of the town predate the map.

Each summer the town hosts the Stratham Fair, held at Stratham Hill Park.

According to the United States Census Bureau, the town has a total area of 15.5 square miles (40 km2), of which 15.1 sq mi (39 km2) is land and 0.4 sq mi (1.0 km2) is water, comprising 2.39% of the town. Stratham is drained by the Squamscott River, a tributary of the Piscataqua River. The highest elevation in town is 290 feet (88 m) above sea level, found on the summits of Stratham Hill and neighboring Jewell Hill.

There were 2,746 households, out of which 37.7% had children under the age of 18 living with them, 64.0% were headed by married couples living together, 7.6% had a female householder with no husband present, and 25.5% were non-families. 20.4% of all households were made up of individuals, and 6.6% were someone living alone who was 65 years of age or older. The average household size was 2.64, and the average family size was 3.08.

Stratham is home to two schools: the Cooperative Middle School and Stratham Memorial School. Stratham Memorial School is located at 39 Gifford Farm Road and teaches from Pre-K to 5th grade. The Cooperative Middle School (CMS) is located at 100 Academic Way and includes grades 6-8. High school students from Stratham attend Exeter High School (grades 9-12). The public elementary and middle school only serve students from Stratham, while the high school serves students from all six towns of SAU 16—in which Stratham is the second-largest town, after Exeter and ahead of Brentwood, Kensington, East Kingston, and Newfields.

All content from Kiddle encyclopedia articles (including the article images and facts) can be freely used under Attribution-ShareAlike license, unless stated otherwise. Cite this article:
Stratham, New Hampshire Facts for Kids. Kiddle Encyclopedia.