Newington is a town in Rockingham County, New Hampshire, United States. The population was 753 at the 2010 census. It is bounded to the west by Great Bay, northwest by Little Bay and northeast by the Piscataqua River. It is home to Portsmouth International Airport at Pease (formerly Pease Air Force Base), and to the New Hampshire National Guard. The 110-acre (45 ha) Old Town Center Historic District is listed on the National Register of Historic Places. 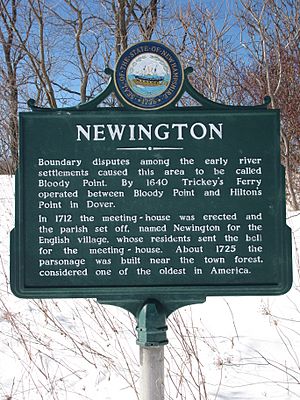 Originally a part of Dover, boundary disputes among early river settlers caused this area to be called Bloody Point. By 1640, Trickey's Ferry operated between Bloody Point and Hilton's Point in Dover. In 1712, the meetinghouse was erected and the parish set off, named Newington for an English village, whose residents sent the bell for the meetinghouse. Behind the meetinghouse is a row of horse sheds, once commonplace but now rare. About 1725 the parsonage was built near the Town Forest, considered one of the oldest in the America. The town would be incorporated in 1764 by Colonial Governor Benning Wentworth. In 1794, a bridge was completed across Little Bay from Fox Point in Newington to the south bank of the Bellamy River in Dover, by way of Goat Island—a major engineering feat in its day.

In 1952, the House Armed Services Committee authorized acquiring by eminent domain large tracts to create Pease Air Force Base, which opened on June 30, 1956. Approximately 60% of the installation lay in Newington, including land in the town's center. It would be, however, the first base recommended to be closed by the 1988 Commission on Base Realignment and Closure. Military personnel in 1990 began leaving the base, which officially closed on March 31, 1991. Although the Air National Guard retained some property, the old base has been intensely redeveloped as the Pease International Tradeport, a business park.

In the 1970s and 1980s, commercial development from neighboring Portsmouth spread into Newington. The Newington Mall opened in the 1970s (replaced by the Crossings at Fox Run in the 2000s), followed by the Fox Run Mall.

The town is crossed by U.S. Route 4 and New Hampshire Route 16.

There were 294 households, out of which 28.2% had children under the age of 18 living with them, 59.5% were married couples living together, 6.8% had a female householder with no husband present, and 28.9% were non-families. 21.8% of all households were made up of individuals, and 8.2% had someone living alone who was 65 years of age or older. The average household size was 2.55 and the average family size was 3.01.

According to the 2016 Auditor's Report, the top businesses in Newington, ranked by assessed value, are:

Another local firm, Little Bay Lobster Co., exported about 50,000 pounds of lobster a week to China in early 2018. SubCom produces transoceanic fiber optic cable, which, as it is being produced, is loaded directly onto a cable laying ship docked nearby on the Piscataqua River.

All content from Kiddle encyclopedia articles (including the article images and facts) can be freely used under Attribution-ShareAlike license, unless stated otherwise. Cite this article:
Newington, New Hampshire Facts for Kids. Kiddle Encyclopedia.